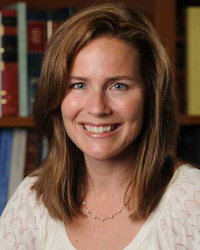 Amy Coney Barrett has been named the Diane and M.O. Miller II Research Professor for a three-year term ending June 30, 2017.

Dean Nell Jessup Newton made the appointment after consulting with senior faculty and chair holders. “Amy,” she said, “is an outstanding teacher, a great colleague, and a highly productive scholar who has achieved national recognition in the field of Federal Courts.”

A member of the NDLS faculty since 2002, Professor Barrett received the Law School’s Distinguished Professor of the Year award in 2006. By appointment of the Chief Justice of the United States she serves on the Advisory Committee for the Federal Rules of Appellate Procedure.

NDLS Professor Jay Tidmarsh, an expert in complex civil litigation and civil procedure, was the previous and inaugural holder of the M.O. Miller professorship, which is designed to rotate among tenured faculty for three-year periods.