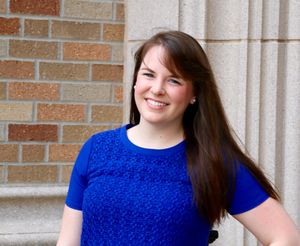 “It has been a joy watching Katie Jo develop as a professional during her time at the Law School,” said Dean Nell Jessup Newton. “The Burton Award is a perfect capstone to an outstanding academic career and this Law School could not be happier for her.”

The Burton Awards for Legal Achievement is run in Association with the Library of Congress. The Burton Awards program is an academic, non-profit, 501( c )( 3 ) effort sponsored by the Burton Foundation. The program is designed to reward major achievements in the law ranging from literary awards to the greatest reform in law. About 30 awards are given to practicing attorneys, and 10 students were awarded the prize for legal writing.

Luningham will be honored with other winners at a formal gala June 15 at the Library of Congress.

“This is such a huge honor and it’s the best way to end a law school career,” said Luningham. She said she gained key support and insight working with mentor Professors Jeff Pojanowski and Patricia O’Hara. “There was so much thought and work that went into this piece. It was one of the most challenging, but certainly the most rewarding, things I worked on while in law school.

“The whole process demonstrated how supportive the faculty are of student research and scholarship.”

“While we felt all of the student papers suggested by faculty were excellent, we selected the paper written by Katie Jo Baumgardner (now Luningham) as the Law School’s nominee for this award because it represented an excellent and well-written analysis of a difficult and timely topic,” they said.

The last NDLS winner of the Burton Award was Meghan Sweeney J.D., ’11. Sweeney is an attorney with Jones Day in Chicago.

Luningham is from Louisburg, Kansas. She is Executive Notes Editor of the Notre Dame Law Review and a Weigand Scholar, a generous scholarship program for outstanding students from Kansas created by J.L. Weigand, Jr. The program, which is the largest private legal scholarship in the nation, benefits students at law schools in Kansas as well as Notre Dame, from which Weigand received his undergraduate degree in 1954.

Luningham has published in both the Notre Dame Law Review and the inaugural issue of the Notre Dame Law Review Online. In 2013, Luningham and her partner, Jackson Garvey, 3L, won the 1L Moot Court Tournament, beating out more than 50 other teams. She spent both summers as a Summer Associate at Husch Blackwell in Kansas City, Mo., and will begin employment with Husch following graduation.

The Burton Foundation is a nonprofit cultural and academic organization devoted to further promoting excellence in law and the stature of the legal profession.