The first professional library school in the United States was founded by Melvil Dewey at Columbia University in 1887. For many years thereafter, it was difficult for women to hold librarian leadership positions and even more so to become law librarians, but it was extremely difficult and rare to be law library directors. In contrast, Notre Dame proved itself to be an equal opportunity employer for women law library directors as early as 1942.

It is said that the heart and strength of an academic university is its library(ies). This sentiment has proven true at Notre Dame with its history of the University Libraries and the Law Library, in particular. In 1918, after World War I, the University of Notre Dame added summer session classes to its program. Among the courses offered was Library Science. Father Foik C.S.C., the founder of the Notre Dame Library and an instrumental figure in establishing the Catholic Library Association, founded the Notre Dame Library School. By 1939, Notre Dame had established a thorough and complete program which entailed four summers of study and included the entire core curriculum offered in library schools across the country. However, since the classes were available only during the summer months, the program was not accredited by the American Library Association and was discontinued in 1952.

In 1869, the study of law began at Notre Dame in the “Law Department,” located in the south end of Sorin Hall. With accreditation from the Association of American Law Schools in 1925, the “Law Department” changed its name to “Law School” and John Whitman was appointed the first law librarian. The law library holdings were meager at first, but from 1925 to 1930 the library grew from 2,500 to 10,000 volumes. 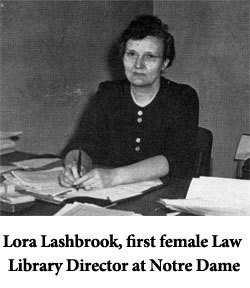 In 1942, as the law library grew, Lora Lashbrook (LLB) was appointed the second law librarian by the Law School Dean, Clarence E. Manion. She was the first female librarian in the all male law school, initially serving a diminished student body due to the bombing of Pearl Harbor and the U.S. involve-ment in World War II. However, through the intervening years from 1942 to1945, the num-ber of students jumped from 50 to 225 and the library collection grew to 16,000 volumes. Being the only librarian, Lora Lashbrook was responsible for overseeing the entire operation, serving concurrently as the teacher of Research Methodology, the Law School Registrar, and Ad-ministrative Assistant to both the Dean and the faculty members. Dean Manion applauded Lora Lashbrook, giving her credit for the survival of the law school during the critical war years. Although there is little material on Lora Lashbrook, she is noted in the Notre Dame Bulletin as “-Lashbrook, Lora D. (LLB.) Special Lecturer, College of Law” in the section entitled Early teachers and Administrators of Notre Dame 1850-1950.

Marie Kathryn Lawrence was the third librarian and second woman to direct the Notre Dame Law Library (1945-66) after transferring from the University Libraries, where she served from 1924-1945 and again from 1966-74. Marie was responsible for the law library and its collection for twenty-one years while serving under two law school Deans, Clarence Manion (1941-1952) and Joseph O‘Meara (1952-1968). Dean O‘Meara wrote of Marie: “She is described … by Professor A.C. Pulling (Director of Harvard Law of long standing), as one of the top librarians of the country. She knows her bibliographies and what an excellent law collection should contain. As a result she is building a well rounded collection that will prove of inestimable value to faculty, students, and those who may carry on research. Miss Lawrence commands the respect of all law librarians from East to West.” 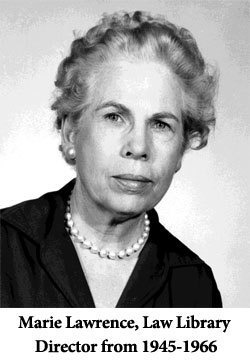 Marie was born on December 11, 1903 and grew up in South Bend, Indiana. In 1921, her bachelor studies began at Indiana University, but due to financial constraints Marie left school after two years to teach Latin and English at Ambia High School in Ambia, Indiana. In 1926, Marie returned to Indiana University-Bloomington and completed her A.B. in English, and Latin a year later in 1927. Furthering her education, Marie received an A.B.L.S. degree in 1935 from the University of Michigan and an M.S. in Library Science in 1949 from Columbia University. Her goal to be a law librarian was already set, as indicated by Marie‘s Masters the-sis, entitled ―Trends in Law School Librarianship, 1926-1946. ’Her data and information were gathered from the law schools with librarians that were members of the Association of American Law Schools during the 1926/27, 1936/37, and the 1946/47 academic years. Marie wrote, “It is interesting to note that it was not until 1937 that the Association of American Law Schools required law schools to have a librarian to oversee the book collection and provide patron service and in 1926, only one of the ten largest libraries had a woman as librarian; in 1936, none; and in 1946, two.”1

Prior to coming to the law library, Marie Lawrence had twenty-one years (1924-1945) of broad professional library experience at the Notre Dame library. She worked in the Circulation Department from 1924-1926, and after graduating from Indiana University, she became the Circulation Department Head, holding that position from 1927-1934 while pursuing an A.B.L.S degree. From 1935-37, she served as a library cataloguer and then became the Reference Department Head from 1937-1943. During the summer months of 1938 and 1939, Marie also taught Library Science at the Notre Dame Library School (mentioned above).

Revealing her sense of humor in recalling her initial days as a Reference Librarian, Marie said “When I became Reference Librarian, I soon discovered it was a good opportunity to learn about things I had never heard of. For example, when I was asked for material on euthanasia, I spelled it as three words beginning with the letter ‘Y.’”

Ever seeking to broaden her skills, Marie left Notre Dame in 1943 to accept a bibliographer position in the Acquisitions Depart-ment at the University of Illinois for a year and then returned to Notre Dame to fill the position of Rare Book Cataloguer at the Notre Dame Library from 1944-45. It was then that Marie transferred to the Notre Dame Law Library as Head Librarian and remained in that capacity until her first retirement in 1966 at the age of 63.

During her years as the Director of the Notre Dame Law Library, Marie not only attended Notre Dame Law School part time, completing 18 hours of law, she also became an active member of ALA, AALL, and the Chicago Association of Law Librarians. Marie experienced many changes at the law school during her administration, including the transition from an all male academic bastion to a mixed student body with the admission of women students for the first time during the 1965/66 academic year.

Marie served an increasing number of law students at Notre Dame, with the student body exceeding 300 in the latter 1940‘s. She taught Legal Bibliography from 1949 to 1952 and by the end of 1958 the library holdings had grown to approximately 50,000 volumes, exhausting the library stack space. Dean O‘Meara was greatly concerned with the in-adequate space allotment and in 1964 modifications were made in the law building. In compliance with a recommendation from the Association of American Law Schools, the library became autonomous from the University Libraries and under the Directorship of the Law School Dean and the law faculty. By the time of Marie‘s first retirement, in 1966, the library‘s holdings totaled 69,000 volumes.

Not to be intellectually inactive, Marie‘s first retirement lasted only a few weeks; she returned to the Notre Dame Library as Head Librarian for the Social Studies, Reference, and the Inter-Library Loan Departments from 1966 until her second retirement in 1974 at the age of 71. Marie referred to herself as a “bibliographer advisor” and stated, “Although I retired from full time employment at UND in 1974, I returned in the middle of September 1974 to work part time” with emeritus status. Subsequently, Marie continued providing library service until her third retirement in 1984 at the age of 81.

With her love of learning and books, Marie continued being involved with the University Libraries on a volunteer basis working as a librarian surrounded by books, helping students, friends, and colleagues alike in the profession she loved so much. One day in 1993 Marie went home for lunch as usual, but never came back. She died that day at the age of 93.

Those who knew Marie, like many of us currently employed with the Law Library and the University Libraries and Archives, remember her with great fondness and admiration:

“She served as Law librarian during the period when the Law Library expanded and became independent of the University Libraries. She not only taught the course in Legal Bibliography but continued her education in both law and librarian-ship, earning an M.S. from Colombia University in 1949.” – Maureen Gleason (Deputy Director, ND University Libraries).

“She was a sweet and friendly lady. I remember her office In the Hesburgh Library, located by the
Reference desk,” – Sharon Sumpter (University Archives).

“I was a friend of Marie’s and she was a reference for me when I applied for a position in the law library over 30 years ago. She was a wonder-ful woman and mentor. She was an intellectual with a great sense of humor.” – Carmela Kinslow (Access Services Dept. Head, Kresge Law Library)

Her successes were notable and she received a special presidential award in 1974 from Father Theodore Hesburgh, who noted that it was an award to: “honor a magnificent lady celebrating her 50th year of service to the Univer-sity of Notre Dame‟s libraries. Marie K. Lawrence was a graduate of America‟s first professional library school at Columbia University and gave pioneering service in virtually every department of Notre Dame‟s library system. She has also been an asset to the community of South Bend taking a founder‟s interest in many of its historical and cultural societies. She saw the campus library grow from 150,000 to 1,200,000 volumes and during that time, trained thousands of students in using what we now refer to as an information system. The library in a Christian institution, how-ever, should have more warmth than that term implies, and people such as Marie Lawrence generate that warmth. She did her job with such style that there is more than one alumnus, especially of the Law School, who must wish to this day he could call up Marie Lawrence and verify his sources. Serve and thou shall be served, said Emerson. „If you love and serve men, you cannot, by any hiding or stratagem, escape the remunera-tion.‟”