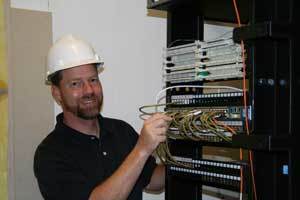 Dan Manier, Director of Law School Technology, is a true son of Notre Dame, being part of the Notre Dame family all his life. He is not only a “Double Domer” with a BA in Sociology and Business in ‘87 and an MNA in ‘93, but he carries the University’s French origins in his veins and the fighting Irish spirit in his soul. His father, a Notre Dame Professor of Philosophy from 1959-2008, is of French descent and his mother was born in New York City to Irish immigrants from County Cork, the “most” Irish Catholic County in Ireland.

When Dan graduated from Notre Dame in ‘87, personal computing was in its infancy and schools were just beginning to adopt them in large numbers. At that time, too, Dan’s mother was terminally ill so after graduation he chose to stay in South Bend and work for a local computing consulting firm providing technological support and consultation to K-12 schools, universities, and colleges. “It was a nice opportunity in a growing field. It paid well, kept me in the area, and ultimately turned into a career.” Computer technology was not Dan’s formal field of study; Notre Dame did not offer many computing classes at the time. So he instead trained directly with IBM, Apple, COMPAQ, and other companies.

Planning on being a teacher or principal, Dan returned to Notre Dame in 1989 for an MNA, a not-for-profit program specifically geared to healthcare and education professionals. In conjunction with his studies, Dan worked full time with the central IT Office on campus. While there, Dan ran a program and consulted with faculty across campus. It was during this time that he met Roger Jacobs, then Associate Dean for Library and Technology. In those early years, Roger and Dan had meetings focusing primarily on computers for faculty desks. There were few PCs for staff and the library only had terminals at the time. In 1998, eager to address the ongoing technological needs and challenges in the Law School and Law Library, and make a difference, Dan applied and was hired for the position of Manager of Law School Computing.

Reflecting over the years and on his hire in ’98, Dan recalled that Roger asked him to think in terms of a new law school building and how to address the technological capabilities and services and bring them up to the next level in preparation for the new facilities. “The old building was not well suited to support all the technological needs of our faculty and students. So, here we are 12 years later and we are doing just that.” A few months after beginning to work for the law school, Dan hired Susan Good as Webmaster and Desktop Consultant, the first of several positions to be added to the IT department. In 2000, the small department continued to expand, adding a position for Audio/Visual services. Over the years, as students brought in more and more laptops, and needed more computing support, in addition to an increased number of students using the computer lab, another position was added for student computing.

Like the library as a whole, the IT department focuses on service. Dan says, “I want people to know they can always come to our IT staff with any technology questions, no matter how easy or complex the issue may be. We will always do our best to help resolve their questions.” Dan’s philosophy is reflected in the driving force behind each member of his IT staff; that is to serve and to be of service. Dan is quick to point out that he could not begin to provide quality service to the law school without the assistance of his exceptionally talented staff, which includes Jeff Morgan (the network manager), Susan Good (the webmaster), Scott Hengert (the classroom support/AV professional), and Eric McCartney (the student computing manager).

In addition to managing all the aspects of IT in the law school, Dan consults directly with law school departments on their IT initiatives, liaisons with other groups on campus, and consults with IT vendors to develop solutions for use in the law school. He serves on the Chief Technology Officer Council (CTO Council) in the area of strategic University Initiatives where technological information is discussed with people in similar positions throughout the university with the intent that shared information will enhance technology campus-wide. He also collaborates with the University’s Office of Information Technology on various initiatives in the law school and library.

In the Fall of 2010, Biolchini Hall will be operational for faculty and student use. The transition period has now ended and the IT Department moved into their new office spaces in the summer of 2010. The computer area located in the new facility is more “purpose built” for technology and will have a different configuration and composition that is more flexible for spatial use. This is one of the goals Dan has been working towards ever since he came here. There will be twenty seats in the instruction lab and adjacent to it will be an area for student seating designed to make it easier for students to spread out and collaborate with each other on projects. Here also, students can connect their laptops to a larger monitor, and research librarians or WestLaw and Lexis consultants can give one-on-one instruction. There will be two new, fifty seat classrooms in Biolchini Hall with advanced professional grade video conferencing capabilities “so students might be able to take a seminar class from someone teaching in London or vice a versa.” If faculty, law departments or students want to collaborate and bring in a guest lecturer from another law school they, too, can be brought in through video conferencing. Dan predicts these classrooms will be very popular. Now that the transition period is over, Dan is looking forward to better serving the faculty who have need of video conferencing and distance learning, providing these services at a higher level and in a more consistent way.

The transitional period marked by the move from the old law school building into temporary quarters in the new Law School and then back again into to the newly renovated Biolchini Hall had its trials and adjustments. The faculty and students were the ones mostly affected, but technology services were greatly challenged with how the faculty and students were able to use their services. One of these challenges included reducing the computer lab from a capacity of 40 work stations down to 8 during the transition. Reflecting on this adjustment, Dan commiserates with the students. “I have to thank the students for being as patient as they were. They were as confined as we were in terms of space and options. Now it is going to feel like such a luxury for them to have all these beautiful spaces in Biolchini Hall with the amazing technology, accessible and available to them. We will be much better situated to support them with access to power and to the internet.”

On a personal note, Dan and his wife Karen have been married for 17 years. Karen is the administrative assistant and program manager for the Higgins Labor Studies Program here at Notre Dame concentrating on fair wage and labor issues. When asked what he is most proud of, Dan quickly responded, “my children!” His daughter Maddie is 13 years old and is in the 8th grade and his son Aidan, 11, is in 6th grade. Both attend St. Joseph’s Grade School in South Bend. Dan is active and involved in his children’s lives. He coaches the “St. Joe” teams that his children have played on, coaching Maddie in soccer and Aidan in basketball and baseball. He says, “I look forward to spending time with my children and doing things like team activities with them where I have the opportunityto see how they interact with their peers, how they progress as young people, and develop their skills. I have really enjoyed the coaching aspect, getting to know all their friends, trying to help them do better with their own skills or as a teammate. I have been coaching for lots of years now and I really enjoy that. ”

Dan has always felt a strong admiration for JFK. “I always felt my lifespan overlapped with John F. Kennedy’s, but it didn’t. It probably felt this way because so many of his initiatives came to fruition when I was young.” Dan most admired JFK’s sense of exploration with the space program, feeling that it was bold and captured the imagination, ingenuity, and technology of that time. Dan is also drawn to JFK’s sense of justice and equality with the civil rights movement. Introducing his children to the values of justice, equality, and civil rights from our country’s historical past, Dan’s family recently accompanied him to a conference in Philadelphia, before which they also stopped to visit Washington, D.C. Dan was excited to share with his children “what it feels like to stand on the steps of the Supreme Court, to go into the White House, to see the Library of Congress and to experience the town that decides so much of what goes on in the country, and to dream about making a difference in whatever they choose to do.”