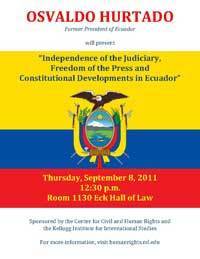 “Independence of the Judiciary, Freedom of the Press and other Constitutional Developments in Ecuador”

Osvaldo Hurtado has been one of the most influential politicians in the last 30 years of Ecuadorian history. He earned both his BA in Political and Social Sciences (‘63) and JD (‘66) from the Pontifical Catholic University of Ecuador (PUCE). In his early career he joined the Ecuadorian Institute for Social Development and taught Political Sociology at both PUCE and the University of New Mexico. He also participated in the formation of the Christian Democrat Party of Ecuador (which has since changed its name to Popular Democracy). In 1968, Hurtado served as Vice-Minister of Social Welfare and Labor.

As a politician, he chaired the Commission that prepared the three statutes – on elections, political parties and referendum – which set the legal foundations for reestablishing democracy in Ecuador after the de-facto government in 1977. In the next elections, Osvaldo Hurtado ran for the Vice-Presidency in a coalition with presidential candidate Jaime Roldós Aguilera. They were elected into office in 1979.

In 1981, President Jaime Roldós died in a plane accident; Osvaldo Hurtado succeeded him as President of Ecuador and served until his term was over in 1984. His government has been praised for strengthening democracy, showing respect to institutions and the rule of law and preserving public liberties.

Upon completion of his time in office and in recognition of his exemplar leadership, President Hurtado was invited to become a member –and many times to chair – a large range of non-governmental international organizations, such as The Club of Madrid, Inter-American Dialogue, The Due Process of Law Foundation, The Carter Center (Atlanta), among many others.

Before and after his time in office, Osvaldo Hurtado published several books and articles on Ecuadorian politics, sociology and economics. Of special importance is El Poder Político en el Ecuador (Political Power in Ecuador) published in Spanish (1977, eighteen editions), English (University of New Mexico Press, 1980 and Westview Press, 1985) and Portuguese (Paz e Terra, 1981). Los Costos del Populismo and Las costumbres de los ecuatorianos (Portrait of a Nation: Cultures and Progress in Ecuador) are his most recent publications. His academic writings about Latin America has been gathered in several books and published in collaboration with other authors in Germany, Argentina, Austria, Brazil, Colombia, Chile, Spain, the United States, France, Italy, Mexico, Peru and Switzerland.

Currently, Hurtado is the Director of CORDES, a nonprofit corporation in Quito that studies the economic, political and social problems of Ecuador, to which he contributes with his studies and publications.

In addition to this work as a scholar, in 1998 Osvaldo Hurtado was elected as a representative to the National Assembly in charge of amending the Ecuadorian Constitution. Hurtado chaired that Assembly and was the proponent of provisions that enlarged the Constitution’s catalogue of social, economic and collective rights, strengthened judicial remedies for the violations of basic liberties and favored political stability and the rule of law.

Conversely, in 2007 he opposed the call of incumbent President Rafael Correa to another National Assembly to draft a new Constitution. Hurtado was among the few that forewarned of the negative consequences that Correa’s vision for the new Constitution would have had on the separation of powers in Ecuador. Correa and his political party –Alianza País – succeeded in calling for another National Constituent Assembly which was dominated by Alianza País’s 80 representatives out of 130 representatives in total.

The Constitution of Montecristi was drafted entirely by the representatives of Alianza País in close coordination with President Correa. The proposed constitutional text did not face substantial opposition in the Assembly, was easily approved by the majority of representatives, and entered into force as the new Ecuadorian Constitution in October 2008 after a referendum in which only 28% of Ecuadorians voted against it.

Yet, that was not the last constitutional amendment that Ecuador would face. Earlier this year, President Correa called for yet another Constitutional Referendum in order to reform the Constitution of Montecristi. Correa proposed changes that would facilitate his intervention in the appointment of judges and control over the administration of justice, as well as restrictions on the freedom of the press through censorship of content and onerous restrictions on the owners of media outlets.

As it has happened in every major constitutional change during recent decades in Ecuador, Osvaldo Hurtado and his ideas strongly influenced the debate. On this occasion, Osvaldo Hurtado joined the Center for Civil and Human Rights of the University of Notre Dame in a campaign to ask the Inter-American Commission on Human Rights to address this serious threat to the independence of the judiciary and to the freedom of press in Ecuador.

Additionally, Hurtado, together with other Ecuadorian scholars and politicians, founded the movement Cauce Democrático in an attempt to campaign against the purported reform, in a context in which the President was using all the public resources available to him to promote his purported reforms.

In spite of all the legal and constitutional objections, the 10 reforms proposed by President Correa were approved by the Constitutional Court, and the National Electoral Council called for the elections on May 7, 2011. This time, the votes against the amendment reached the 45%, but the questions that referred to the constitutional reforms regarding the administration of the judiciary were approved, as well as questions regarding the restrictions to the freedom of the press.

At the same time, President Correa has sued one of the major newspapers in Ecuador for defamation, asking for $80 million in damages and the imprisonment of the newspaper’s owners and the editorialist that accused him of crimes against humanity. In a case that would normally take several years, the Criminal Judge of First Instance decided in less than a month to order the unprecedented amount of $40 million for punitive damages, and ordered the imprisonment of the defendants. The appeal of this and similar cases will be heard by newly appointed judges in the Court of Appeals and then in Ecuador’s highest court. If the judgment remains unchanged, the newspaper will be forced to close in order to pay the damages ordered by the judge. Furthermore, President Correa seems to have succeeded in deterring other newspapers and media sources from expressing criticism of his government.

In the face of these daunting challenges, President Hurtado’s Cauce Democrático is one of the few organizations in Ecuador that remains vocal in its criticism of Correa’s government.