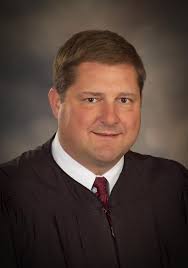 The Kansas Supreme Court has appointed District Judge Robert Burns as chief judge of the 29th Judicial District which is composed of Wyandotte County. Burns is a lifelong resident of Kansas City, Kansas, where he was elected a district judge for the 29th Judicial District in 2004. Prior to this Burns worked in private practice from 1991 to 1995 and a legal department attorney for the Unified Government of Wyandotte County and Kansas City, Kansas, from 1996 to 2004.