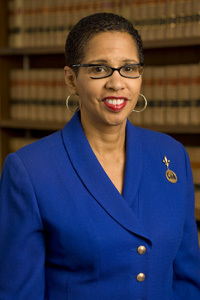 The 2012 Rev. Edward Frederick Sorin, C.S.C. Award was recently presented to Judge Ann Claire Williams. She is the first judge of color appointed to the U.S. Court of Appeals for the Seventh Circuit and the third woman of color to serve on any U.S. court of appeals. Before that appointment, Williams served on the U.S. District Court for the Northern District of Illinois. At 35, she was the youngest woman of color ever appointed to the federal bench.

After graduating from NDLS, she co-founded Minority Legal Education Resources, which has helped over 4,000 lawyers pass the Illinois bar at a rate that equals or exceeds the annual passage rate. In 1987, she helped found the Black Women Lawyers’ Association of Chicago, and in 1991, an order she entered in In Re Folding Carton (N.D. Ill. 1991) directed $2.3 million in cy pres funds to create a public interest post-graduate legal fellowship program administered by Equal Justice Works. In 1992, Judge Williams co-founded the Just The Beginning Foundation, an organization that has evolved into a pipeline organization to encourage students of color and other under-represented groups to pursue legal careers.

Established in 1965, the Rev. Edward Frederick Sorin, C.S.C., Award is conferred on an alumnus/alumna (living or deceased), not a current employee of Notre Dame, who has rendered distinguished service to the University.