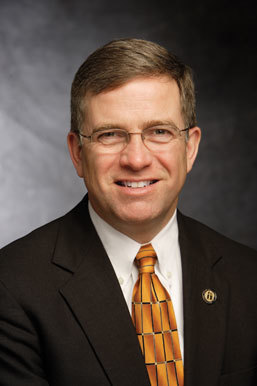 On July 1, 2010, Notre Dame Law School alumnus John Hurley began his tenure as the first lay president of Canisius College in that institution’s 140-year history. He previously served as the college’s executive vice president and vice president for college relations.

He served as an associate in the Chicago law firm of Keck, Mahin & Cate from 1981-1984 before returning to Buffalo in 1984 to take a position as an associate (1984-1988) and then partner (1989-1997) at Phillips, Lytle LLP. During his legal career, Hurley concentrated his practice in the
areas of secured lending, bankruptcy and insolvency, creditors’ rights and acquisitions of troubled companies.

Since 1997, he has been the senior development and external relations officer responsible for capital campaigns, planned and annual giving programs, grant services, all external and media relations, alumni relations and college publications. Under his tenure, the college has raised in excess of $116 million in total voluntary support. In 2007, Hurley was promoted to the position of executive vice president and took on the additional responsibilities for the coordination of the college’s senior leadership team, strategic planning, integrated marketing, and legal and compliance issues.