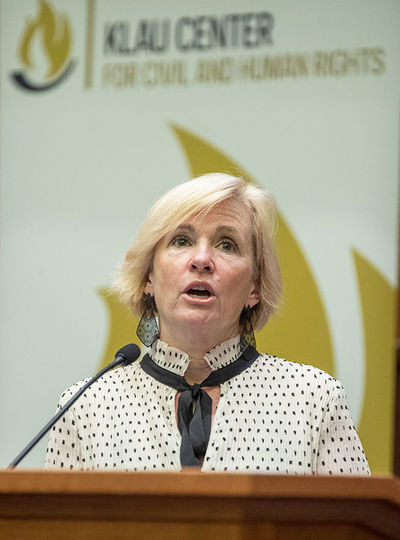 On Thursday, November 7, the Klau Center and the Exoneration Project welcomed Jennifer Thompson to Notre Dame Law School. Thompson, founder and director of the Healing Justice Project, recalled her experience at the center of a wrongful conviction case, and its devastating aftermath.

Thompson’s story began in 1984, as a 22 year old college student in Burlington, North Carolina. One night in July of that year, an intruder entered her home and raped her at knifepoint. Keeping her composure, Thomson attempted to collect as much information about her assailant as she could, before fleeing her apartment to the safety of a neighbor’s home.

Thompson soon learned that another woman had just been raped less than a mile away. She was now a traumatized victim of sexual assault, tasked with identifying the man who should be brought to justice for two brutal attacks. “I had never in my life hated anyone the way I hated this man,” she remembered. “I could taste it coming up from the pit of my stomach, I could taste it in the back of my throat.” Confident in her ability to describe the attacker, Thompson produced a composite sketch for police that within hours resulted in a phone call identifying the man as Ronald Cotton. The same evening as her rape, in a photographic lineup, she chose Cotton and later, in a physical lineup, did the same.

“…we toasted the criminal justice system because it worked for me. Me, I got justice; Ronald Cotton was going to die in prison, and that’s the way it should be.”

At trial, Cotton was found guilty despite proclaiming his innocence. “We went back to the District Attorney’s office,” Thompson recalled grimly. “They had champagne in those little Dixie paper cups, and we toasted the criminal justice system because it worked for me. Me, I got justice; Ronald Cotton was going to die in prison, and that’s the way it should be. That’s the way it has to be.”

After serving ten years in prison, however, Ronald Cotton – still claiming to be innocent of the crimes – in 1995 requested post-conviction DNA testing. The test exonerated Cotton and positively incriminated another man, Bobby Poole. It was the first time a DNA test had done so.

For Thompson, the revelation came as a fresh wound. “The earth opened up and swallowed me,” she said. Now carrying the weight of not only the original attack but also the knowledge of the injustice carried out as a result, Thompson found herself unable to function normally day to day. Desperate to find resolution, she asked to meet Ronald Cotton, whose life had also been devastated by the actions of her assailant. The two became friends.

In 2015 Thompson founded the Healing Justice Project, dedicated to helping those who are affected by wrongful convictions. According to Thompson, the organization’s core mission is to acknowledge the layers of harm and the network of people affected. “At the center of every wrongful conviction case, there’s a perpetrator,” says Thompson, “and everybody in the circle outside gets hurt. It’s the original victim. It’s my family. It’s Ronald, and it was Ronald’s family. It was the six other women that were raped by Bobby Poole…it was the community, who believed that the right person had gone to prison; it was the police department, it was the jurors, under two trials, 24 men and woman asked to participate in a system that had failed, and now were carrying the burden of participating in a wrongful conviction…”

Ending on a hopeful note, Thompson invoked the co-called “Butterfly Effect” of unintended, unforeseeable consequences. “As you leave here today,” she said, “know that every movement you make, every word you say, has weight and means something, and has an effect. So if we’re going to create a butterfly effect in our lives, let’s just make sure it’s a positive one…”

Thompson’s talk can viewed in its entirety below.

Originally published by Kevin Fye at klau.nd.edu on November 18, 2019.