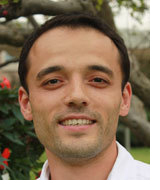 J.S.D. candidate Mirakmal Niyazmatov will present and defend his dissertation, “Evidence Obtained By Cruel, Inhuman or Degrading Treatment: A New Interpretation in Light of the General Principles of Law,” on Monday, November 4 at Notre Dame Law School.

Mr. Niyazmatov earned his Bachelor of Laws from the University of World Economy and Diplomacy in 2004 (Tashkent, Uzbekistan) and his LL.M. from Notre Dame Law School’s Center for Civil and Human Rights in 2007. He interned at the International Committee of the Red Cross working on the ratification/implementation of the Rome Statute of the ICC and worked as a Human Rights Assistant at the United Nations Development Program in Uzbekistan. After obtaining his LL.M., he interned for six month at the Amnesty International UN Office in New York. Mirakmal’s research focuses on freedom of expression, treaty interpretation, implementation of international law norms, definition of torture, and the admissibility of evidence obtained by coercion.

Mr. Niyazmatov is the most recent graduate of the CCHR J.S.D. Program in International Human Rights Law.