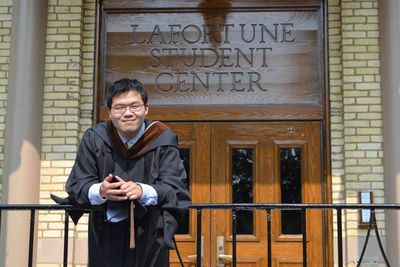 Yifan Wang ’15 M.F.A. arrived at the University of Notre Dame with an idea for a low-cost way to make smartphone cases.

By using pulp instead of plastic, he thought, the price for a case could be significantly lower while still protecting the phone. People could buy cases with different designs and change the look of their smartphones more often.

Thanks to the Intellectual Property and Entrepreneurship Clinic at Notre Dame Law School, Wang’s idea is now a patented invention. The clinic, which the Law School launched in 2012, assists local businesses and entrepreneurs while providing students with valuable experience in applying intellectual property law.

“I had this idea in the back of my mind before I went to grad school,” Wang said. “I was an industrial design major, which helped me picture it, but it would have been impossible for me to do all of the work for the patent without the clinic’s help.”

Wang, who also earned his M.F.A. in industrial design, learned about the IP and Entrepreneurship Clinic during the second year of his three-year master’s program. He decided to contact the clinic’s director, Jodi Clifford, to tell her about his idea and confirm it was patentable.

From there, Wang met with a team of students who performed a search to see if any similar patents had already been issued. Then they began drafting an application to the U.S. Patent and Trademark Office. It was a long process – Wang finally received his patent on March 13 of this year.

Wang said one aspect of working with the clinic that impressed him was how the years-long process continued to progress, even while the students working on it came and went from semester to semester and year to year.

The experience is valuable for students, too.

Notre Dame Law School considers experiential learning – including clinical experiences as well as externships, skills courses, and immersion programs – to be a core part of a legal education. The IP and Entrepreneurship Clinic is one of the Law School’s five clinics, all of which function as teaching law offices where students work as lead attorneys on real cases under the supervision of seasoned faculty members.

Ariell Bratton ’17 J.D. is one of the students who worked on Wang’s patent application. She is now an associate with Paul Hastings LLP in the firm’s intellectual property litigation practice in San Diego.

“While my work in the clinic focused on patent prosecution, the skills I learned there are directly transferable to my IP litigation practice,” Bratton said.

“For example, at the clinic I worked on drafting a response to an office action for Wang’s patent application. In particular, we were tasked with overcoming an obviousness argument,” she said. “This called for the ability to understand and articulate the scope of the patent claims and impact of the prior art. These issues are also critical pieces of patent litigation. This is just one of many examples of how the clinic prepared me to tackle complex tasks in my current practice.”

Wang, now a senior industrial designer at Whirlpool Corporation, said he was excited to obtain the patent, and he wants to continue moving forward.

“I want to see this become real,” he said. “I want to take it into production, and I’m trying to find resources to do that.”