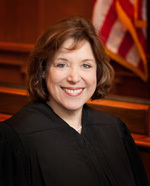 Judge Martha Blood Wentworth, Indiana’s Tax Court judge, heard arguments on the State’s Motion to Dismiss and arguments on the merits of the case. Judge Wentworth was appointed to the Indiana Tax Court by Governor Mitch Daniels in January 2011. Immediately prior to her appointment she spent more than twelve years at Deloitte Tax, LLP, nearly ten of which were as Tax Director for Deloitte’s Indiana and multistate tax services. Prior to joining Deloitte, she practiced law with the Indianapolis firm Hall, Render, Killian, Heath & Lyman, PC.

The briefs in the case are available at the following links: