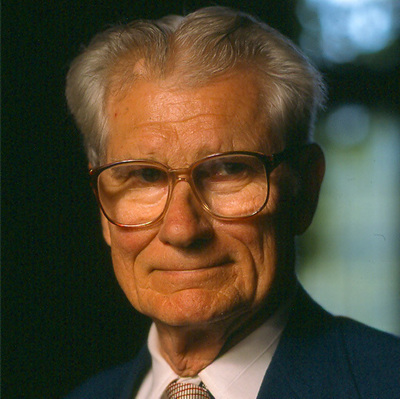 Notre Dame Law Professor Emeritus Thomas F. Broden Jr. — a pioneer in clinical legal education and a skilled advocate for civil rights and the indigent — died Friday, November 20, at his home in South Bend. He was 96.

Inspired by the writings of St. Thomas Aquinas, Broden conceived of the law as an instrument to advance the greater good, and in particular to protect the rights and dignity of individuals with less power and influence in society. He joined the Notre Dame Law School faculty in 1950 and served the University, the South Bend community, and the government in numerous ways.

Broden taught a wide variety of courses, including Jurisprudence, Criminal Law, and Administrative Law. For many years, he also taught a course called Law and Poverty, in which students spent a semester working with a local community organization. In 1965, he worked with the federal government to start the nationwide Legal Services Program to assist low-income persons, and the program he started with Notre Dame and the surrounding South Bend community served as the model for programs later initiated at other law schools.

“He was my professor in my first year of law school. I always thought he was a great professor,” said Link, who returned to Notre Dame to join the law faculty in 1970 and served as dean from 1975 to 1999.

“It was wonderful to have him on the faculty. First of all, he was a great teacher, always prepared. I never received one complaint about him as a teacher,” Link said. “But as a community leader, he was magnificent. He was very caring. He really cared about people. It wasn’t just academic; he really thought about the people for whom he was advocating.”

Broden’s long list of accomplishments includes playing an integral role in the creation of the U.S. Civil Rights Commission in 1956. As counsel to the U.S. House of Representatives Judiciary Committee, he was the staff attorney-in-charge of the first civil rights bill since the post-Civil War Reconstruction Era. From 1967 through 1969, he directed training and technical assistance for the federal Anti-Poverty Program. And in 1970, he began the University’s Institute for Urban Studies and served as its director for 20 years. Under his leadership, the institute conducted research and educational activities to promote equality of opportunity, to develop strategies for urban ministry, and to find ways to improve the lives of those living in poverty.

Professor Emeritus Fernand “Tex” Dutile, a 1965 Notre Dame Law School graduate who joined the faculty in 1971, said he had the privilege of knowing Broden for nearly 60 years.

“I took several courses he taught, including Jurisprudence and Administrative Law. But I especially enjoyed, and was influenced by, his Criminal Law course. Surely not coincidentally, I myself ended up teaching that course at the Law School for decades,” Dutile said. “In class and out, he exuded professionalism. He treated students with unfailing fairness, respect, and gentle humor. He clearly modeled how people in general, and lawyers in particular, should act.”

As a colleague, Dutile said, Broden was friendly, cooperative, and eminently decent. “I never recall him uttering a mean-spirited comment or even raising his voice,” he said.

Dutile concluded, “As teacher, colleague, public servant, family man and friend, his life was, by any measure — and to use a word he loved — ‘sensational.’”

Patricia O’Hara, a 1974 Notre Dame Law School graduate who served as dean from 1999 to 2009, said Broden was the last of a legendary cohort of senior faculty dating back to the tenure of Deans Clarence Manion and Joseph O’Meara — a cohort that included Frank Booker, Conrad Kellenberg, Ed Murphy, Charlie Rice, Bob Rodes, and Peter Thornton. “Countless alumni, now in senior ranks themselves, have regaled me with stories of these men who shaped the Law School over a period of four decades in the second half of the 20th century,” O’Hara said.

Long before clinical legal education existed as a discipline, Broden was on the forefront of bridging academic theory with experiential learning, O’Hara said.

Professor Nell Jessup Newton, who served as the Law School’s dean from 2009 to 2019, concurred that Broden was one of the giants of Notre Dame Law School.

“He made his mark not just on our students, but also on the larger community,” Newton said. “Tom truly understood that the law should serve those at the margins and that justice has to consider the greater good. He will be sorely missed.”

“He did not merely join causes. He created novel institutions and strategies to redress poverty and racial injustice,” Jones said. “Among other innovations, he invented clinical legal education at Notre Dame, creating a model for the nation, at a time when few had the imagination to understand the contribution that law students could make to their communities by providing free legal services.”

Professor Judith Fox, a 1993 Notre Dame Law School graduate and director of the Law School’s Economic Justice Clinic, said Broden had a profound effect on both the Law School and the community through his tireless work on issues of social justice and racial equality.

“For instance, before the passage of the Fair Housing Act, he and Professor Conrad Kellenberg held hearings in South Bend that exposed racial discrimination in housing and led to a local nondiscrimination ordinance,” Fox said. “He did not simply profess his Catholic faith, he lived it. Many people who never heard of him are living better lives because of him.”

Professor Matthew J. Barrett ’82, ’85 J.D. was in Broden’s Property I class as a first-year law student and later became one of his neighbors in South Bend.

“He was kind, committed, patient, and generous with his time. When you read his list of accomplishments, his humility stands out even more than it did while I was a student in his course,” Barrett said.

“In the neighborhood, Tom loved roses and was happy to share his tips for thriving roses with anyone in the neighborhood who asked. As long as he could do it, he enjoyed walking up and down our street along the St. Joseph River, listening to Cubs baseball games,” Barrett said. “Perhaps my fondest memory of Tom comes from Halloween. Each year, Tom would take a picture of every neighborhood family that came to their door to trick-or-treat. Several days later, he would drop off, or later mail, a copy of the picture he had taken.”

Broden was honored on many occasions for his service to Notre Dame and the community. His awards include the Notre Dame Presidential Award (1976), for which University President Rev. Theodore M. Hesburgh, C.S.C., described Broden as “a man who has brought the best of the academy to the promise of our city.” The University also honored him with its Reinhold Niebuhr Award for Social Justice (1978) and its John Cardinal O’Hara Award (1995) that acknowledges former employees whose personal life reflects Notre Dame’s principles. Pope Paul VI inducted him as a knight into the Order of St. Gregory the Great (1965), a title discerned to lay persons for “the renown of their deeds.”

“Over the years, the University and local community bestowed on Tom every possible honor to recognize his unparalleled service to those in our midst who are most marginalized — tributes he did not seek and never mentioned,” O’Hara said. “He was a gentleman in the truest sense of the word — a gentle man who was a champion of working for peace by fighting for justice for all.”

Broden was preceded in death by his beloved wife, Joanne, to whom he was married for 70 years. He is survived by their five children, nine grandchildren, and two great-grandchildren.

Click here to read the obituary written by Broden’s family.