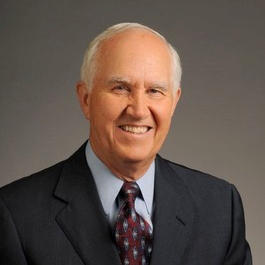 It is with deep sorrow that Notre Dame Law School announces the passing of longtime Law School Advisory Council member Tim Malloy, who died on September 3, 2019.

After earning his B.S. in electrical engineering from Notre Dame in 1966 and his J.D. from Notre Dame Law School in 1969, Malloy went on to win many professional accolades for his work as a nationally recognized patent lawyer.

McAndrews said, “When Tim Malloy, with electrical engineering and law degrees, asked me to employ him at our patent firm I was overjoyed. Then in 1988 he joined me in founding a new patent firm, McAndrews, Held & Malloy, which rapidly grew to 110 professionals. Tim was spectacular. He worked with me and became one of the best IP litigators in America. I regarded him as a brother and was proud of our shared Notre Dame education.”

In 2003, Malloy joined the Law School Advisory Council. Professor Patricia O’Hara, then dean, noted, “Tim Malloy was an exemplar of the values of mind, heart, and soul that we strive to instill in our students. Recipient of the highest honors from his peers in patent litigation, he was a consummate professional with a finely-honed moral compass and a spirit of service. A devoted husband and beloved father, grandfather, and brother, I will always be grateful for Tim’s advice and counsel during my tenure as dean, as well as for the generous manner in which he and his wife, Patti, shared their time, talent, and treasure with the Law School — in particular, in support of student fellowships.”

Professor Nell Jessup Newton, who served as dean from 2009 to 2019, said, “Tim was one of those invaluable advisors every dean needs, someone who loved the Law School, loved the profession, and did everything he could to help the school succeed. His passing is a great loss to us all.”

Malloy formed many deep friendships within the Notre Dame community.

Law School Advisory Council member Hank Catenacci ’66, ’69 J.D., first met Malloy in his freshman year at Notre Dame. He said, “Tim lived in Stanford Hall and I lived in Keenan — adjoining dorms. We graduated from ND in 1966 and then started NDLS together, graduating in 1969 in a class of 74 guys. He was a brilliant student and became an exceptional attorney. Tim and I have both been on the Law School Advisory Council for many years. Over those years, Tim and his wife, Patti, and myself and my wife, Kathy, spent a great deal of time together at Advisory Council weekends and became even better friends. He was totally dedicated to his wife of 50 years, his two children and 11 grandchildren, and he was always cheerful and upbeat. We have our 50th reunion scheduled for the weekend of September 20-21 this year, and Tim and I had talked just a couple of months ago about playing golf next Friday. Instead I will be at the Grotto lighting a candle and asking him to pray for me. I will miss him greatly.”

For the past 28 years, Malloy and his wife, Patti, have been active in Link Unlimited, a Chicago-based organization dedicated to supporting and mentoring African American high school students. They were one of only three couples to receive the Link Mentor Merit Award, and the family has asked that donations in Tim’s memory be made to LINK Unlimited Scholars, 2221 S. State St., Chicago, IL 60616. The phone number is 312-225-5465.