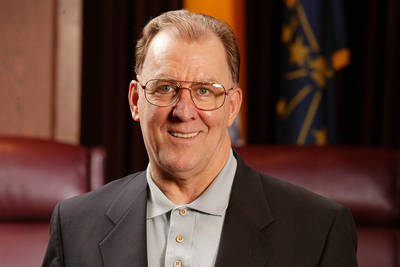 Notre Dame Law Professor Emeritus J. Eric Smithburn — a leading scholar in family law and a compassionate advocate for disadvantaged children and families — passed away June 18. He was 76.

Smithburn joined the Notre Dame Law School faculty in 1978 after serving as a judge in Marshall County, Indiana. In addition to family law and juvenile law, his academic interests included evidence and appellate review. He taught trial advocacy in his early years as a professor and became a regular lecturer at the National Institute for Trial Advocacy, which was originally located at Notre Dame. He was also a sought-out speaker in judicial circles nationwide and wrote several highly regarded books.

He masterfully directed Notre Dame Law School’s summer program in London from 1984 to 2000. Under his leadership, the Notre Dame program attracted and enrolled students from law schools across the United States. He was also admitted as a barrister in the United Kingdom.

In addition to his responsibilities as a professor, Smithburn served as a senior judge in St. Joseph County Probate Court and continued to serve on the bench after retiring from the law faculty in 2015.

“Notre Dame Law School has reached its current place among the nation’s best law schools in part because of the contributions of Eric Smithburn,” Joseph A. Matson Dean and Professor of Law G. Marcus Cole said.

Colleagues described Smithburn, who stood 6-foot-4, as big in every way — a big man with a big heart, big laugh, and a big love for family and life in general.

“I always thought of Eric as a gentle giant,” said Professor Emerita Patricia O’Hara ’74 J.D., who served as the Law School’s dean from 1999 to 2009. “Beneath his physical exterior, honed from years as an adult on the rugby field, was a compassion deepened by his experience as a trial court judge dealing with families and youths in crisis, as well as by his own loss of his infant son, Conner. To enter his faculty office was to step back in time and see curios inherited from his parents that were not important to him because of their intrinsic value, but because he treasured family. Eric took deep pride in the professional reputation as a lawyer enjoyed by his wife, Aladean, and regaled colleagues with the accomplishments of his son, Scott, and his step-daughter, Kylea.”

“He loved his family, the law, athletics, music, the Lizzie Borden case, and London. Surely this love of London, coupled with hard work, attention to detail, and care for the richness of the students’ experience, propelled him, as director, to keep Notre Dame’s London summer law program as the very best such American program over the entire span of his sixteen years’ leadership,” Dutile said. “Eric’s contributions to the legal profession, to the Law School, and to its students are immeasurable. Always cheerful, warm, and ready to laugh, he enriched the faculty. He brought to us a unique perspective that was uniquely valuable. And despite his wide panoply of distinguished achievements, this truly gentle man always exuded a genuine, remarkable humility.”

Professor Emeritus Joseph P. Bauer said he observed Smithburn’s deep commitment to the well-being of his students, the University community, and the larger world during the more than 25 years that they were colleagues.

“His principal goals as a faculty member were disseminating knowledge, advancing justice, and promoting integrity,” Bauer said. “Eric had a global perspective well before it was fashionable to be ‘international.’ Among the manifestations of this interest were his admission to the English bar as a barrister, and his success as the director of the Law School’s London summer program for many, many years, during which the quality and the size of the program were at its peak. The Law School is a much better place for his contributions.”

“I recall when Eric was called to the bar of England and Wales. It was one of his proudest accomplishments: from small town Indiana lawyer to international practice,” Tidmarsh said. “He loved all things English. He was a beloved teacher and a scholar of family and appellate law, but I admit that my personal favorite was his book on British English for the American tourist, which is an absolute hoot.”

“We spent many hours talking about life and law,” Nash said. “What impressed me most was that, while we discussed the nuances of cases and statutes, he never forgot how profoundly the law affects the people involved in family law. He was the type of person who cared about people who were often considered unworthy.”

Tidmarsh added, “Eric was devoted to family and juvenile law, which are emotionally fraught fields in which to work, and he never lost his basic optimism about human nature and progress.”

Peter Tomas Morgan ’90, ’98 J.D., ’99 LL.M. was in Smithburn’s evidence course as a law student. After graduation, as an attorney with Indiana Legal Services, Morgan argued cases in front of Smithburn while the professor was serving as a probate court judge. Morgan later became executive director of the St. Joseph Probate Court/Juvenile Justice Center, where Smithburn maintained an office as a senior judge.

“Maya Angelou said that people will forget what you said, people will forget what you did, but people will never forget how you made them feel. I remember very clearly a number of Professor Smithburn’s quotes from evidence class at the Law School,” Morgan said. “I can still hear his clear, thoughtful rulings from the bench as I struggled through my first full-day guardianship trial at the St. Joseph Probate Court. I thankfully have and will keep close his volumes on family and juvenile law.

“But beyond these, what drew me to seek him out in his office at the St. Joseph Probate Court/Juvenile Justice Center or at the Law School several times over the years, and what I now will certainly miss the most, was his presence,” Morgan said. “I felt he saw in me something better than I could see. I felt he believed in possibilities and values and standards that I had lost the courage to claim. I felt encouraged again toward compassion and fairness by the feeling of being genuinely regarded with both. I am a better person for having known him, I know that. Many of us are. I will never pass down the words, the arguments, the statements of the kind which he left behind. But as much as I value these, I value more how he has inspired me to be present to the person in front of me, whether in the courtroom, in the law office, or on the street, with fairness, with respect, with a genuine belief that we can all be our better selves. Thank you, Professor Smithburn, for all your lessons.”

Click here to read the obituary written by Smithburn’s family.