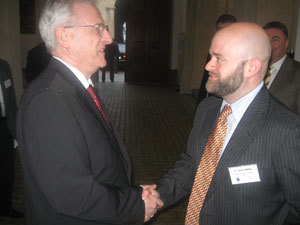 When Notre Dame Associate Professor of Law O. Carter Snead looked into the audience during a recent lecture in Hungary, that nation’s president—László Sólyom—looked back. “He was quite interested in the ethical, legal, and social issues connected to stem cell research, and asked very thoughtful questions,” says Snead, who delivered the keynote address at a conference titled “Human Dignity and the Modern Academy” in Esztergom.

Prof. Snead had the honor of speaking with President Sólyom both before and after his talk. “He was particularly interested in discussing the relationship between law and morality; he wanted to explore the ways in which the law both shapes and reflects the moral commitments of a society,” says Snead. “I also learned that he had attended a conference at Notre Dame Law School a few decades ago (organized by Notre Dame Professor of Law Emeritus Don Kommers), when he was one of the founding judges on Constitutional Court of Hungary.”

The three-day event involved talks by academics from the United States and Hungary on stem cell research; truth and relativism; and the mind, brain, and soul. Snead’s keynote was titled “Dignity of the Human Person, the Legal Status of the Embryo, and Current Trends in Stem Cell Research.” In addition to Professor Snead, some of Notre Dame’s top researchers gave presentations, including Prof. David Hyde (prominent adult stem cell scientist and Co-Director of Notre Dame’s Molecular Bioscience Program) and Prof. Greg Timp (recently appointed Keough-Hesburgh chair of Electrical Engineering and Biological Science). Conference planners Peter Kilpatrick (Dean of Notre Dame College of Engineering) and Tamas Roska (one of the most prominent professors of Electrical Engineering in the world) sought to bring together a diverse array of interdisciplinary scholars from medicine, law, engineering, the biosciences, philosophy and theology to discuss the ethical challenges posed by advances in biomedical science and biotechnology. The goal of the event was to promote scholarly exchange and facilitate intellectual friendship between scholars in Hungary and the United States.

Prof. Snead is currently teaching at Notre Dame’s London Law Centre. His principal area of research is public bioethics – the governance of science, medicine, and biotechnology in the name of ethical goods. His scholarly works have explored issues relating to neuroethics, enhancement, stem cell research, abortion, and end-of-life decision-making.

In addition to his scholarship and teaching, Prof. Snead has provided advice on the legal and public policy dimensions of bioethical questions to officials in all three branches of the U.S. government, and in several intergovernmental fora. Prior to joining the law faculty at Notre Dame, Professor Snead served as General Counsel to The President’s Council on Bioethics (Chaired by Dr. Leon R. Kass), where he was the primary drafter of the 2004 report, “Reproduction and Responsibility: The Regulation of New Biotechnologies.” In 2006, he testified in the U.S. House of Representatives on regulatory questions concerning RU-486 (the abortion pill).

From 2004 to 2005, Professor Snead led the U.S. government delegation and served as its chief negotiator for the Universal Declaration on Bioethics and Human Rights (adopted in October 2005). He served (along with Dr. Edmund Pellegrino) as U.S. government’s Permanent Observer to the Council of Europe’s Steering Committee on Bioethics (CDBI), where he assisted in its efforts to elaborate international instruments and standards for the ethical governance of science and medicine. In conjunction with the American Association for the Advancement of Science (AAAS), he regularly lectures to state and federal judges on the uses of neuroimaging in the courtroom.

In 2008, Prof. Snead was appointed by the Director-General of UNESCO to a four-year term on the International Bioethics Committee (IBC), a 36-member body of independent experts that advises member states on bioethics, law, and public policy. The IBC is the only bioethics commission in the world with a global mandate.