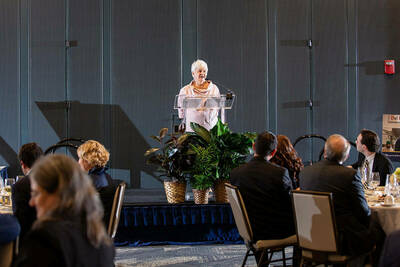 Two members of the Notre Dame Law School community were recognized at the inaugural Rev. David T. Link Public Interest Banquet last month for their commitment to public interest work. The Law School honored Clinical Professor Emerita of Law Judy Fox and alumna Tia Paulette ’18 J.D., both of whom have personified the legacy of Father Link.

The Rev. David T. Link Public Interest Banquet was organized by the Law School’s Public Interest Leadership Council, an interorganizational group made up of the presidents of each of the Law School’s public interest student organizations. Council members involved with planning the event were Maura Burke, William Golden, Jeanna James, Father Matt Kuczora, Pirie Maher, and Ally Morcus. The council members selected the award winners, developed the program for the evening, and served as the masters of ceremony including introducing the award winners.

The council is seeking contact information of ND Law alumni who have previously worked or are currently working in the public interest space, especially those who have worked in government or legal aid positions. The collected information will be made available as a multi-faceted resource to better serve law students and the Notre Dame public interest community.

We ask that those alumni interested in providing their information fill out the following form.

Father Link was the longest-serving dean of Notre Dame Law School, and lived an exemplary life of service. He once said, “Your vocation is what you do to make a living. Your purpose in life is what you do to make living worthwhile.” It was Link who originated the phrase “a different kind of lawyer” to describe the unique training students receive at Notre Dame.

Joseph A. Matson Dean and Professor of Law G. Marcus Cole said, “In that one phrase, David Link captures the mission and purpose of Notre Dame Law School, to produce lawyers of great skill and competence, but those also dedicated to the service of others and of their community. He demonstrated this throughout his life. He was a man who loved God and loved his neighbor as himself.”

Father Link dramatically changed the Law School, bringing diversity to the school by recruiting women and people of color to the faculty and to the student body. He oversaw two major building expansions, the growth of the library, and the addition of research centers. He was also a leader in the South Bend community, helping to establish the Center for the Homeless and Dismas House, a transitional residence for men and women recently released from prison.

After his wife died, Father Link followed God's voice and became a priest. He was ordained in 2008 and spent his entire time as a priest ministering to and serving inmates of the seven prisons of northern Indiana. He passed away in October of 2021.

Paulette received the inaugural Rev. David T. Link Impact Award that recognizes a member or friend of the Law School community whose work has embraced Father Link’s legacy of advocating for justice.

“I am extremely honored to be the recipient of the David Link award. To even be compared to Father Link is truly an honor that I do not take lightly. I thank everyone who has been so supportive of me. I am so grateful,” said Paulette.

Paulette’s dedication and compassion to public service stems from a childhood filled with poverty and homelessness. She remembers feeling helpless, unseen, and unheard. She navigated life with little help from family. But, she said, she had many people who came to her aid and who assisted her along the way.

“I will never forget what those people who brought me refuge did for me. Being on the receiving end of that kindness and generosity filled me up, and made me want to do something with my life that would put me in the position to constantly give back to the world what was given to me. That is why I decided to become an attorney,” said Paulette.

One of the goals Paulette and the students had for the Exoneration Project was to provide education about the many issues that wrongfully convicted people face, and the problems within the criminal justice system. The group brought an exoneree, Keith Cooper, to the Law School to speak in 2017. Cooper recounted his story about his wrongful conviction, how the criminal justice system had failed him, and how unseen and unheard he felt. Paulette said his story brought back all of the emotions she felt as a child and, in that moment, she found her calling. She knew what she was supposed to do. “I couldn’t do much about my own childhood,” she said, “but I had the power and resources to do something for other people who were feeling the same. It brought me closer to the exoneration cause and to the organization.”

The Rev. David T. Link South Bend Community Award was awarded to Professor Fox. The award is given to a member of the local community who has advocated on behalf of the disadvantaged and marginalized, and who has upheld the dignity of the vulnerable.

Fox, a 1993 graduate of Notre Dame Law School, served on the Law School faculty for 25 years and dedicated her legal career to fighting for fair housing and other socioeconomic issues. She ran the Economic Justice Clinic since its inception and has supervised hundreds of Notre Dame Law students as they represented clients in cases involving mortgage foreclosures, predatory lending, land contract and foreclosure fraud, and debt collection.

Fox served as a member of the Consumer Advisory Board of the Consumer Financial Protection Bureau, as a member of the legislative committee of the National Association of Consumer Advocates, and on the Advisory Board of the Indiana Foreclosure Assistance Project. Most recently, she served on a new commission — the Indiana Commission on Equity and Access in the Court System — established by the Indiana Supreme Court to foster public trust and confidence in the state’s courts.

Earlier this year, the mayors of South Bend and Mishawaka presented Fox with the 2022 Dr. Martin Luther King Jr. Drum Major for Community Service Award. The honor recognized her decades of dedication to assisting local, low-income people facing eviction and other financial hardships.

She has also received awards for her work in consumer protection law, including the Bellow Scholar Award from the American Association of Law Schools, and the St. Joseph Valley Project Community Achievement Award for Social Justice. Notre Dame featured Fox in its “What Would You Fight For?” campaign, Fighting For Fair Housing, in 2018.