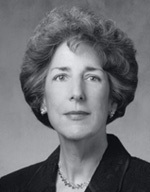 During the week of August 15, 2015, California Supreme Court Associate Justice Carol A. Corrigan will serve as the Judge James J. Clynes, Jr. Visiting Chair in the Ethics of Litigation Within the Judicial Process. Justice Corrigan will teach in the Intensive Trial Advocacy program.

Justice Corrigan has a long career in public service and on the bench. After earning her degrees from Holy Names College and Hastings College of Law, she began work as a district attorney in Alameda County (1975-1987) and then proceeded to serve as a judge in the Oakland Emeryville Piedmont Judicial District (1987-1991), Judge of Alameda County Superior Court (1991-1994), and Associate Justice of the California First Appellate District, Division Three (1994-2006). She was appointed Associate Justice of the California Supreme Court on January 4, 2006. Read more