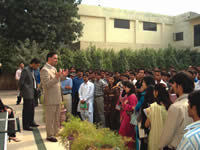 When General Pervez Musharraf suspended the Pakistani Constitution and imposed martial law last November, Ali Qazilbash ’97LL.M., ’05J.S.D. knew that he was facing a crisis for which he had prepared all of his life.

Ironically, the news reached Qazilbash, dean of the Pakistan College of Law in Lahore, just after he had given a public presentation on the protections of the Pakistani Constitution. By decree of the general, who had ruled Pakistan for eight years after taking power in a military coup, those protections simply disappeared. In his attempt to silence opposition and be elected president, Musharraf also had hundreds of lawyers and human-rights activists arrested.

The next class day, Qazilbash gathered with hundreds of his students as they replaced the flag of Pakistan in the law-school courtyard with a black flag of mourning. “I told them that the best way to protest this affront to democracy and the rule of law is to continue with their studies, to become lawyers and to fight for justice,” says Qazilbash. In a show of solidarity with their law professors and professional colleagues, the students donned black arm bands.

This simple act of solidarity would multiply and overflow in the following days and weeks. Soon, Qazilbash was leading delegations of law students and human-rights activists to the homes of deposed Supreme Court and High Court judges and lawyers under house arrest. Bearing only flowers and messages of support, these simple visits became powerful acts of protest against martial law.

Qazilbash knew his actions could land him in jail. The local newspapers began to highlight his law school as one of the institutions defying the emergency order. “My 6-year-old daughter began to ask if the police were going to come and take me away,” he recalls. In a highly courageous act, more than 300 of his law students signed a petition pledging to be arrested with their dean if he was taken away.

Working for human rights in Pakistan
Qazilbash is no stranger to the violence that comes with being a human-rights lawyer in Pakistan. Throughout the early 1990s, he had been a lawyer with the AGHS Legal Aid Cell, founded by the renowned human-rights lawyers and sisters, Asma Jahangir and Hina Jilani. Educated by Catholic missionary nuns in a majority Muslim country, Qazilbash found himself sympathetic to the claims of religious minorities and other vulnerable groups in Pakistan. He defended Christians who were forced to convert to Islam, Muslims accused of blasphemy by the religious authorities and the rights of women in the conservative Pakistani society.

Lacking any formal training in human rights (he now teaches one of the only law courses in human rights available in Pakistan), Qazilbash looked to Notre Dame and its Center for Civil and Human Rights for the support he needed. He graduated from the center’s LL.M. program in human rights and moved on to its doctorate program. “At Notre Dame, my wife and I felt like part of a family. We have brought that sense of a welcoming community back with us to Pakistan. It helps us stand for what we believe in,” he says.

After 11 years in the United States, Qazilbash and his wife made the uneasy decision to return to their native Pakistan. Their two children were both born in the United States and had never lived in Pakistan. His former law partners – now U.N. human-rights officials – had been threatened with death, publicly beaten and arrested by Pakistani police for their defense of women’s rights. Indeed, within months of their return, Pakistan slipped into martial law.

Despite the violence and upheaval, Qazilbash has maintained his trademark sense of humor. When informed last fall of the prayers of the Notre Dame community for him and his family, Qazilbash demurred. “My prayers are for the football team this weekend. We need a victory!”

The uncertainty of the future remains. His children are repeatedly sent home from school because of bomb threats. They no longer believe their parents’ white lie that the explosions in the streets are just like the firecrackers in South Bend on the Fourth of July. “I thank God every time I arrive home safe and alive,” says Qazilbash, “but this is our reality and we will face it.”

In late February, the Pakistani people faced that reality together and took what Qazilbash calls a “major positive step forward” by rejecting Musharraf’s party in parliamentary elections. But he remains adamant that the international community must continue to presure the new coalition government to restore the judiciary, release all detained lawyers and judges, and guarantee the human rights of all.

Adds Qazilbash, “The elections show that the future of Pakistan can be democracy and the rule of law, but only if the U.S. and the international community support the forces of moderation and those who stand for human rights.”

Sean O’Brien is assistant director of Notre Dame’s Center for Civil and Human Rights and an assistant professor of law.