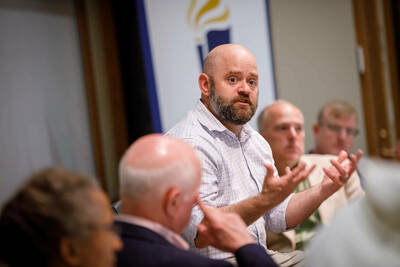 The Dallas chapter of the St. Thomas More Society honored O. Carter Snead, professor of law at Notre Dame Law School and director of the de Nicola Center for Ethics and Culture, at its annual Red Mass on October 9, 2021. The society’s Red Mass invokes the guidance of the Holy Spirit in the securing of justice, and is celebrated each fall to mark the beginning of the new legal term for the Texas courts.

Awarded to “those who exemplify the ideals of service and sacrifice in the pursuit of justice so conspicuously reflected in the life and death of St. Thomas More,” previous honorees at the Society’s Red Mass include Supreme Court Justice Antonin Scalia, U.S. Representative Henry Hyde, Avery Cardinal Dulles, and the Honorable Amy Coney Barrett, at the time a judge on the U.S. Court of Appeals for the Seventh Circuit.

“I am incredibly honored and grateful to the St. Thomas More Society for this recognition, and humbled to be included in the company of such esteemed past recipients,” Snead said.

In his remarks at dinner after the Red Mass, Snead drew upon his award-winning book What It Means to Be Human: The Case for the Body in Public Bioethics to highlight the deep relationship between anthropology and the law as expressed in public bioethics. Echoing arguments from the amici curiae brief that he and Harvard professor emerita Mary Ann Glendon filed in the pending Dobbs v. Jackson Women's Health Organization case, Snead told the audience that the Supreme Court's jurisprudence in Roe v. Wade and Planned Parenthood v. Casey grafts on to the Constitution "an unwarranted and false understanding of human identity and flourishing" that isolates mother and child, portraying them as strangers in a zero-sum conflict. He observed that this fundamental mis-framing of the human context led the Court to invent a violent “solution” suited to atomized individual wills in a world of strife, namely the right to use lethal force to repel an unwanted interloper.

But the human context of abortion is not, Snead argued, a fight among strangers over scarce resources. It is instead an often tragic crisis involving a mother and her child who, like all embodied beings, need networks of uncalculated giving and graceful receiving to survive and flourish. Framed in this way, the correct response is not to empower one party to use violence against the other, but rather to come to the aid of both mother and child, and surround them with the love and support they need before, during, and after the child is born. “It is long past time that the Supreme Court unshackled the American people from its extreme and legally unjustified abortion jurisprudence, allowing us to reason together and adopt policies and laws that care rightly for mothers, children (born and unborn) and families,” Snead concluded.

Snead is one of the world's leading experts on public bioethics — the governance of science, medicine, and biotechnology in the name of ethical goods. His research explores issues relating to neuroethics, enhancement, human embryo research, assisted reproduction, abortion, and end-of-life decision-making. He is the author of What It Means to be Human: The Case for the Body in Public Bioethics (Harvard University Press, 2020), named by the Wall Street Journal as one of the “Ten Best Books of 2020.” Additionally, he has written more than 60 journal articles, book chapters, and essays. He is the editor of two book series for the University of Notre Dame Press — “Catholic Ideas for a Secular World” and “Notre Dame Studies in Bioethics and Medical Ethics.” Snead teaches Law & Bioethics, Health Law, Torts, and Constitutional Criminal Procedure at Notre Dame Law School.

Snead regularly serves as an expert witness on bioethical matters before federal courts. In 2008, he was appointed by the director-general of UNESCO to a four-year term on the International Bioethics Committee, a 36-member body of independent experts that advises member states on bioethics, law, and public policy. The IBC is the only bioethics commission in the world with a global mandate. In 2016, he was appointed to the Pontifical Academy for Life, the principal bioethics advisory body to Pope Francis. He is also an elected fellow of The Hastings Center, the oldest independent bioethics research institute in the world.

The Dallas chapter of the St. Thomas More Society was established in the 1980s to encourage Catholic lawyers within the diocese of Dallas to live their Christian vocation by sanctifying their daily work. The Society promotes the practice of the highest ethical principles among its members, encourages the study of the natural law and its application to the legal profession, stimulates the practice of Christian precepts in the formulation and administration of the law, and serves as a source of fellowship for its members and other legal professionals in the Dallas area.