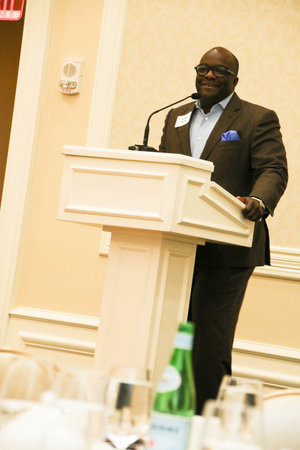 I liken one’s career to the plight of wildebeest in the Serengeti Plains. Millions of wildebeest run across millennia-old trails through the Serengeti in search for grazing land and water. Predators know these trails just as well as the wildebeest and they follow them, searching for the weak, the young, and the inexperienced wildebeest to attack, kill, and devour.

The oldest, most battle-tested wildebeest lead the pack of millions, followed by other age groups in descending order … the nine-year olds lead the pack, followed by the eight-year olds, and the seven-year olds, etc., this numerical symmetry is broken by mothers of weaning calves who run in the middle to be protected from the large cats that lurk about.

Of course, once a young wildebeest can fend for itself it will take its place running with its two-year-old peers. I would imagine that occasionally, a four-year-old wildebeest will jump higher than her peers, dodge a lion more gracefully, exhibit the behavior of a five-year-old. So, she gets to run with the five-year olds and see the world from a five-year old’s perspective. I call this career propelling events, something (an opportunity, unique set of circumstances, dumb luck, etc.) that separates one from her peers and elevates them to a different set of peers and experiences.

This was my story and fellowships (Public Policy and International Affairs (2000), Robert Bosch Foundation Fellowship or Young American Leaders (2007-08) and the Broad Residency in Urban Education (2008-10)) served as my career-propelling events, this young wildebeest leaped from one peer group of young attorneys to experience the world as a leader of people who had been working longer than I had been alive! I was riding high, avoiding obvious predators and feeling pretty great about myself. The opportunities I had dreamed of came to my plate fast and hard.

Like an intrepid young wildebeest, I knew about lions, crocodiles and cheetahs but no one told me that a porcupine’s quills to my snout could slay me as surely as a big cat. I was unprepared to lead in tough times. Lessons that I would have learned as a patient, young attorney were missed as I displayed my superior leaping ability. I did not enjoy and invest in the present but rather was too focused on getting to the next step. I did get to those next steps fast … but without the emotional, spiritual and experiential musculature to sustain myself that I would have developed by digging deep into the roles from which I sought to escape.

The logical result of an over-dependence on career propelling events was being perceived, rightfully so, as a talented but weak, unproven leader – an arrow to the heart in the management world. I was rushing my way through life and it showed.
Here is what I learned:

The good news, I’m back on track. I’m leading an innovative education start-up, my first CEO role – ahead of schedule mind you. I still embrace career propelling events – I was selected as a 2016 Eisenhower Foundation Fellow to China – but I am a humbler, more honest version of my previous self.

This is not an argument for a reduction of ambition, Lord knows I have enough for all of the Southern Hemisphere, but rather I am suggesting a stronger embrace of the present so that one learns all that one is supposed to learn in your current station and the wisdom to know when you are ready to show others how high you can leap.