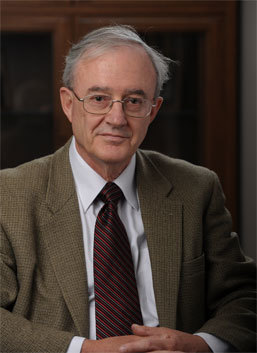 To celebrate this remarkable achievement, Professor Gerard Bradley and Notre Dame Law School hosted an all-day conference at the Law School on September 9, 2011. 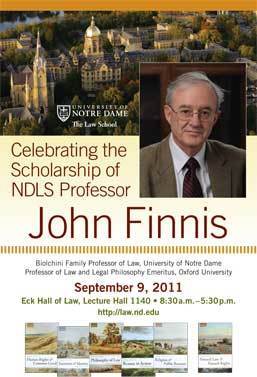 An Oxford publication of this magnitude is a singular honor.

“Oxford University Press (OUP) has a more than merely plausible claim to being the most prestigious academic publishing house in the world. Across an extraordinarily wide range of intellectual disciplines, OUP publishes books by scholars of the highest standing. There is no academic writer in any field for whom a book contract with OUP is anything less than a high honor.

“In philosophy of law, OUP is simply peerless. It has published important works by almost all of the leading thinkers in the field, including H.L.A. Hart, Joseph Raz, Neil McCormick, Jeremy Waldron, and John Finnis.

“OUP has now honored Professor Finnis in a remarkable way. It has published in five volumes his collected writings in philosophy of law, political philosophy, ethics, action theory, and religion. And it has done this while publishing a second edition of Finnis’s masterwork, Natural Law and Natural Rights.

“Such a decision by a publisher as eminent as Oxford University Press testifies powerfully to the originality, importance, and influence of John Finnis’s work, and to the esteem in which he is held by his academic peers. Needless to say, Finnis has won this esteem by the force of his intellect and the power of his arguments, and not by validating or reinforcing prevailing academic orthodoxies. Indeed, at every level Finnis’s work challenges and undermines such orthodoxies.

“It is fair to say that within the academy, Finnis has truly “comforted the afflicted and afflicted the comfortable.” On issue after issue, whether the question is methodological, metaphysical, empirical, or ethical, he has challenged—-and often unnerved—-the establishment. His courage and devotion to truth have inspired not only those of us who have had the honor formally to study with him, but also the thousands upon thousands of people who, having benefited enormously from his writings, regard themselves as “Finnis students” secundum quid.”