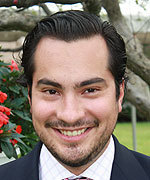 Center for Civil and Human Rights Research Associate Pier Paolo Pigozzi (NDLS LL.M. ’10) has initiated a campaign to ask the Inter-American Commission on Human Rights to address a serious threat to the independence of the judiciary and to the freedom of press in Ecuador. The threat to these basic principles of democracy emerges from a call for a popular referendum to amend the Ecuadorian Constitution, delivered by the President of the Republic of Ecuador to the nation’s Constitutional Court on January 17, 2011.

The proposed amendments would create an administrative body with vaguely defined authority to regulate the free press and what it can say. They would also create a temporary body, which could be effectively controlled by the President, to preside over an overhaul of the judiciary for an 18-month period, during which it could replace most or all sitting judges.

With the support of the Director of the Center, Professor Doug Cassel, Pigozzi drafted a letter presenting the international legal arguments to the Inter-American Commission (see letter in English) (See letter in Spanish). The letter was immediately joined by prominent Ecuadorian jurists and organizations. They include Dr. Hernán Salgado Pesantes, former President of the Inter-American Court of Human Rights, and Pablo Dávila, the Executive President of Ecuador’s Chamber of Industries, as well as former Ecuadoran Presidents Osvaldo Hurtado and Gustavo Noboa, former United Nations High Commissioner for Human Rights José Ayala Lasso, as well as the organization of media publishers of Ecuador, and the Law School of the Pontifical Catholic University of Ecuador, among others.

After the letter was sent to the Commission, a press conference was organized in Ecuador. Participating by Skype video conference, Professor Cassel explained to the principal Ecuadorian news agencies and media the international obligations that would be violated by the purported reform to the Ecuadorian Constitution. (See Prof. Cassel’s statement)

On February 15, by a 6-3 vote, the Constitutional Court (see the judgments: Case N0001 11 CP, Case N0001 11 RC ) allowed the referendum to proceed (although it modified the wording of some of the questions). The process of the referendum, it appears, will now go forward. Even so, the defense of an independent judiciary and a free press for the Ecuadorian society are now also supported by an awareness of the international obligations that the Ecuadorian State must follow in any proposed reform. Meanwhile, the Inter-American Commission is alerted to the threat to freedom. In the event the Constitutional amendments were to be adopted and implemented, a further petition challenging them may be filed with the Inter-American Commission. If the State were to persist in any violations, the matter could eventually be brought before the Inter-American Court of Human Rights for a judgment that would legally bind Ecuador to comply fully with the American Convention on Human Rights.

The Center for Civil and Human Rights remains actively engaged on this matter. Full documentation can be found on the Center’s web site, www.humanrights.nd.edu.