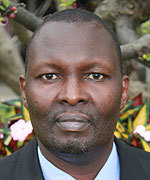 John Imanene (’10 LL.M.) has been invited by Amnesty International to speak at two events this week. On Tuesday, October 26, John will be the keynote speaker at Allegheny College’s Year of Global Citizenship. John was also invited by the African Studies Program at the University of Pittsburgh to speak on Thursday, October 27.

In both cases, John will be reflecting on his experience as lead investigator for the Kenyan National Commission on Human Rights (KNCHR). During his time with the KNCHR, John recovered information about the extra-judicial killings and forced disappearances in Kenya. Along with a corroborating report from NYU Law Professor Philip Alston, the UN Special Rapporteur on extra-judicial, summary or arbitrary executions, his work was presented to the 11th session of the UN Human Rights Council where the Government of Kenya, represented by five cabinet ministers, acknowledged government complicity in the killings of over 500 civilians starting in 2000. As a result the Government undertook to reform the judiciary, the police force and the entire criminal justice system.