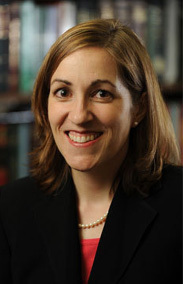 Patricia Bellia, the new chair of the University of Notre Dame’s Faculty Board on Athletics, has excelled at the highest levels of collegiate athletics and academics, giving her firsthand – and, for that matter, forehand – experience in her new position.

A Division I tennis player at Harvard University, Bellia is now a professor of law at Notre Dame Law School. She was elected to the University’s Faculty Board on Athletics in 2005 and became chair Aug. 1.

“My hope is that my experiences give me a good sense of both the challenges and rewards of pursuing excellence in academics and excellence in athletics,” Bellia said.

Bellia was raised near Boston and introduced to tennis by her mother.

“Because our family didn’t belong to a club, my mother decided to form a town team for us and found a summer recreational league for us to join,” she remembers. “I started getting more serious about the sport when I was in junior high school. Once in high school, I split my time between tennis in the spring and cross country and indoor track in the fall and winter.”

Bellia was recruited by several universities to play tennis, though not by Harvard, where she enrolled as a government major and, as she readily acknowledges, made an unforced error by giving up competitive tennis.

“I hadn’t realized the ways in which playing a sport helped me to focus, to study efficiently and to stay healthy. I also missed being part of a team working toward common goals.”

Bellia earned a position on the Harvard tennis team as a sophomore and is convinced her efforts as a college athlete over the next three years made her a more successful student.

“Overall, my experience in athletics taught me lessons about discipline, perseverance, humility and the importance of maintaining balance in life,” she said.

Those principles and others are central to the Notre Dame student-athlete experience and part of the mandate of the Faculty Board on Athletics. In ensuring that the athletic program operates in consonance with the University’s educational mission, the board monitors data on the admission of student-athletes and their academic performance, progress toward degrees, and graduation rates. It also assesses the effectiveness of institutional support for student-athletes.

The board is composed of 15 members: seven elected from the University’s teaching and research faculty; four appointed by the president (three from the teaching and research faculty and one from the student body); and four ex officio members – the vice president for student affairs, the director of athletics, the director of academic services for student-athletes, and a representative from the president’s office.
In addition to chairing the faculty board, Bellia serves as the University’s NCAA faculty athletics representative.

A member of the Notre Dame faculty since 2000, Bellia teaches and conducts research in the areas of constitutional law, administrative law, cyberlaw, electronic surveillance law, and copyright law. She is a co-author of a leading cyberlaw casebook and has published several articles on Internet law and separation of powers.

After earning her bachelor’s degree from Harvard, Bellia worked at the Carnegie Endowment for International Peace, serving as an editor for Foreign Policy magazine and co-authoring a book on self-determination movements. She then enrolled at Yale Law School, where she served as editor-in-chief of the Yale Law Journal, executive editor of the Yale Journal of International Law, and student director of the Immigration Legal Services Clinic.

Upon graduation in 1995, Bellia clerked for Judge José A. Cabranes of the United States Court of Appeals for the Second Circuit and Associate Justice Sandra Day O’Connor of the Supreme Court of the United States. Before joining the Notre Dame faculty, she worked for three years as an attorney-advisor in the Office of Legal Counsel of the U.S. Department of Justice.

Not long after moving to South Bend, Bellia competed successfully in several local tennis tournaments. A hip injury has forced her to the sidelines for the past four years, but, she says, “I hope to be back on the court within a couple of years.”

Originally published by at newsinfo.nd.edu on September 15, 2009.