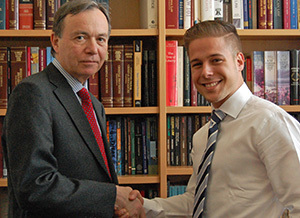 Armando Cordoves (candidate for J.D. ’14) has been awarded the Peter Lardy Memorial Fellowship for the 2013-2014 academic year. Dedicated by the Class of 1975 to the memory of Peter A.R. Lardy and “those who exemplify his Courage, Love, and Understanding toward his fellow man,” the fellowship includes a substantial tuition remission for the recipient’s third year of law school.

Cordoves hails from Hialeah Gardens, Florida. He received his undergraduate degree from Florida International University in 2011, having studied political science and religious studies. After graduation, he plans to focus his work on banking and finance law.

His name will be added to the Lardy Fellowship plaque’s list of recipients, which includes 2012-2013 Fellow Adrienne de la Rosa and extends back to the first recipient, John F. Ready, in 1976.