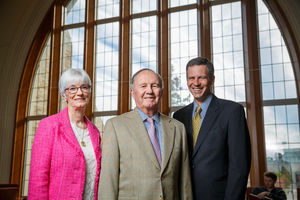 The University of Notre Dame has appointed NDLS Professor A.J. Bellia to serve as the inaugural O’Toole Professor of Constitutional Law.

This Endowed Chair is funded by a significant gift from Judge Thomas W. and Elaine S. O’Toole to support the study and teaching of constitutional law at Notre Dame Law School. Judge O’Toole, who obtained his B.A. from Notre Dame and his L.L.B. from the University of Arizona, long served with distinction on the Maricopa County Superior Court.

“We are delighted to be able to endow this professorship,” said Judge O’Toole, “and Elaine and I were very happy to learn that a scholar as distinguished as Professor Bellia would be the first to receive it.”

“The entire school was very excited to learn the news,” Dean Nell Jessup Newton said. “A.J. is universally regarded as one of the top constitutional law and federal courts scholars in the country, and here at home he is beloved by our students. In fact they twice elected him Professor of the Year.”

“I am so grateful to the O’Tooles for their profound generosity to the Law School,” Professor Bellia said. “Their ongoing support has been crucial in advancing the study of constitutional law at Notre Dame. I am honored to serve as the first O’Toole Chair — and inspired by the commitment to justice, integrity, and rigor that the O’Toole name represents.”

Prior to joining the faculty in 2000, Professor Bellia clerked for Associate Justice Antonin Scalia of the Supreme Court of the United States, Judge Diarmuid F. O’Scannlain of the United States Court of Appeals for the Ninth Circuit, and Judge William M. Skretny of the United States District Court for the Western District of New York. He also practiced law as an associate with Miller, Cassidy, Larroca & Lewin in Washington, D.C., litigating constitutional, criminal, and commercial cases in state and federal courts.