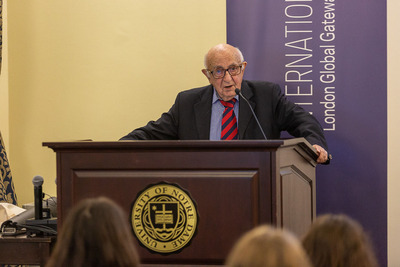 On November 9, Meron delivered Notre Dame Law School’s Peace Through Law Lecture at the University of Notre Dame’s London Global Gateway. The annual keynote lecture explores the attainment of peace through the successful implementation of justice and the rule of law. The series was made possible through a generous benefaction from Thomas F. Fay, a 1961 graduate of the University of Notre Dame and a distinguished lawyer and trial litigator who has devoted his career to pursuing justice for American victims of terrorism.

Meron spoke on November 9 to an audience of faculty, students, and London-based attorneys and human rights advocates. He discussed the characteristics and goals of international criminal justice, the political environment in which it operates, the challenges to the fight against impunity, its achievements and shortcomings, the agendas of the different stakeholders, and the role of international criminal justice in promoting peace and reconciliation.

With extensive experience in leadership roles on United Nations international criminal tribunals, Meron was able to speak as both a scholar and practitioner. Although he didn’t mention it during his lecture, Meron also has had the personal experience of surviving war as he and his Jewish family fled his birth country of Poland after the Nazis invaded in 1939.

He began his lecture by saying, “We will ask ourselves, as I’m sure we do from time to time, why do we need international criminal tribunals?” He noted that the world did not have any such tribunals for a half-century after the Nuremberg Trials.

“International criminal tribunals provide a forum for due-process trials for major war criminals. Letting them go free would be untenable, as would be summary executions or perpetual imprisonment without trial. So, we need some legal process to deal with them,” Meron said.

“National prosecutions do provide a viable option, but they also present certain challenges and difficulties. Standing alone, they present a danger of either pro-defendant bias … or anti-defendant bias and even vengefulness and vendettas,” he explained. “The right mix would be a constructive synergy between international criminal courts and national courts. We need some kind of a synergy.”

International criminal tribunals are unique, Meron said, in the sense that they are stand-alone courts not supported by the apparatus of a states. This raises challenges since a tribunal does not have its own enforcement power or its own police force.

Notre Dame Law Professor Jimmy Gurulé, a former federal prosecutor and expert in international criminal law, organizes the annual Peace Through Law Lecture. He observed at the end of the event on November 9 that Meron embodies ND Law’s ideal of educating a “different kind of lawyer.”

“A different kind of lawyer is a lawyer that is a force for good, that is committed to making society better. Judge Meron certainly is that different kind of lawyer,” Gurulé said to the audience. “He’s dedicated his career to making a positive impact on international criminal law and pursuing justice around the world. To that end, I think the global legal community owes a great debt to him for his work.”