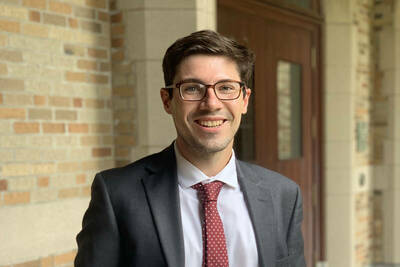 First prize went to third-year law student Thomas Hellenbrand for his paper, “Race to the Top: The UK Legal Sector After Brexit.” The winning paper focused on the legal market impact of the United Kingdom leaving the European Union, also known as “Brexit.”

“Thomas Hellenbrand’s paper was far and away the best from a very solid pool, in the quality of legal research, the very sharp analysis of Brexit’s effects on the UK legal sector,” said Professor of Law and Global Affairs Diane Desierto, who serves as faculty director for the Law School’s LL.M. in International Human Rights Law. “All members of the jury deemed his paper as exceptional and immediately publishable in a top law review, given its likely impact on assessing post-Brexit law practice.”

Hellenbrand said his interest in the topic was spurred by several English legal academics and practitioners who made little attempt to disguise their distaste for the Brexit referendum.

“They worried that the UK had isolated itself from the rest of the world,” Hellenbrand said. “But I soon noticed that English legal professionals, despite their vocal dissatisfaction with the new status quo, evinced a great confidence in the UK legal sector’s ability to weather the storm and maintain its position as one of the preeminent commercial legal regimes on the international stage. My paper assesses whether this optimism is well founded.”

In his paper, Hellenbrand examines increased international competition among commercial courts’ choice-of-court and choice-of-law regimes, the new complexities of UK cross-border practice rights in the European Union, and other quagmires for UK lawyers and firms, such as legal professional privilege and corporate structuring. He argues that the UK legal sector will continue to face increased international competition that, in the long term, will challenge the UK’s commercial legal empire.

“I am grateful to the International & Graduate Programs at Notre Dame Law School for facilitating this competition and for providing so many opportunities for law students to engage with legal issues from an international perspective,” Hellenbrand said.

The prize committee chose three semifinalists in the competition: