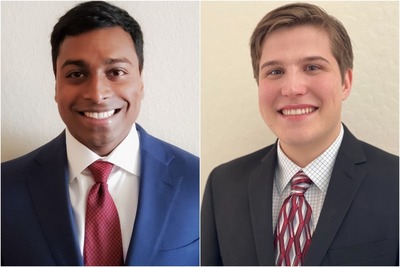 They now advance to the international finals, which will be held virtually in March. Saravanan and Simonitis will compete against winning teams from Africa, Asia, Europe, India, Latin America, and the United Kingdom.

This competition’s case problem was about protecting bat species and the impact alternative energy sources, such as wind power, have on animal welfare and wildlife. The teams competed virtually in three preliminary rounds, and then in knockout rounds until the finalists were determined.

They are both happy to have been able to participate in the competition despite the pandemic and are looking forward to the final round of the competition.

Simonitis said, “I’m extremely thankful that I had the opportunity to compete in this tournament. It was a challenging experience, especially as the entire tournament was held virtually, but we were able to persevere. I would like to thank everyone at Stetson who helped conduct the tournament, those who took the time to volunteer as judges, Professor Huber for helping us to prepare, the Moot Court Board for helping us to practice beforehand, and most importantly, my partner Ambris for being the best co-agent anyone could ask for. I can’t wait to continue to the international rounds where we will continue to make Notre Dame proud.”

The Stetson International Environmental Moot Court Competition is the world's largest moot court competition devoted exclusively to global environmental challenges. Since 1996, teams from around the world have participated in the competition hosted by Stetson University College of Law.