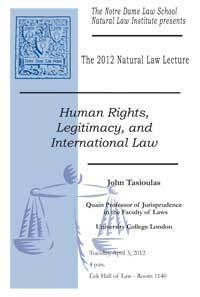 John Tasioulas, Quain Professor of Jurisprudence in the Faculty of Laws at University College London will be delivering the 2012 Natural Law Lecture at NDLS on Tuesday, April 3, at 4 p.m. in Eck Hall of Law Room 1140. The lecture is open to the public.

Professor Tasioulas has written widely on issues regarding human rights, punishment, and international law. He is the co-editor (with Samantha Besson) of The Philosophy of International Law (Oxford: Oxford University Press, 2010) and is currently working on a monograph on the philosophy of human rights.

Tasioulas was born in Australia, his parents having emigrated to that country from Greece in the early 1960s. He received degrees in philosophy and law from the University of Melbourne and studied as a Rhodes Scholar at the University of Oxford where he completed a D.Phil on moral relativism under the supervision of Joseph Raz.