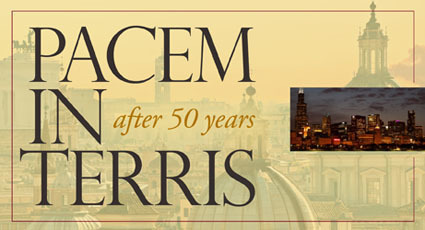 Marking the 50th Anniversary of Pope John XXIII’s important encyclical Pacem in terris, the conference’s goal was to evaluate the encyclical’s perspective in light of developments in the international geo-political situation over the last 50 years that have affected the way states and other global actors seek to achieve a just and peaceful political and economic order.

The conference began with a keynote address by Roland Minnerath, Archbishop of Dijon, followed by a panel discussion by a highly distinguished panel of scholars. The session was held at the University of Chicago on April 4th.

The April 4 opening session was webcast to Notre Dame Law School. A recording of the live webcast can found here

(Video may take a few moments to load)

The conference continued on Friday, April 5th in invitation-only sessions in downtown Chicago. The Friday sessionsfeatured scholars from a variety of disciplines, government leaders, and a select group of Catholic prelates including Cardinal Jean-Louis Tauran, the President of the Pontifical Council on Interreligious Dialogue. The wide-ranging discussions engaged issues affecting the international community with respect to human rights, religion and religious freedom, sovereignty and subsidiarity, and the conditions that serve to foster a just peace.

Schedule of sessions on Friday, April 5: