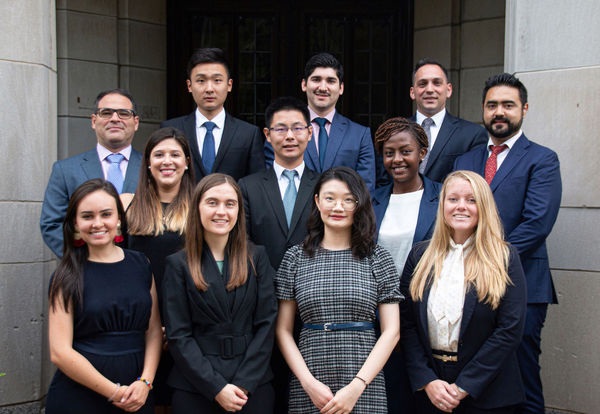 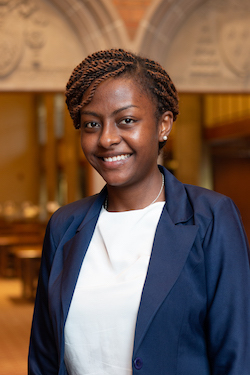 Lavinia Karambu Anampio is an advocate of the High Court of Kenya and a member of the Law Society of Kenya. She holds a Bachelor of Laws degree from Strathmore University. She was admitted to the bar in February 2019 after completing her postgraduate Diploma in Law at the Kenya School of Law. During her time as a law student, she worked as an intern undertaking research at the Centre for Intellectual Property and Information Technology Law at the Strathmore Law School. She also assisted in editing the book “The Constitution of Kenya, 2010” by PLO Lumumba and Prof. Luis Franceschi. She also worked as an intern in the legal department at Barclays Bank of Kenya. After completing her degree, she worked as an intern at Maonga Ndonye Associates, a company secretarial firm.  She then worked as a legal assistant at a law firm, Hamilton Harrison & Mathews where she rose through the ranks and is currently an associate in the Corporate Commercial and Real Estate Department. She is a 2019-2020 Riley Scholar at Notre Dame. 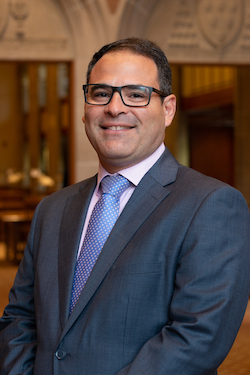 Ricardo Wagner de Araujo earned his law degree in 2009 from Centro Universitario do Distrito Federal and has a bachelor’s degree in business administration from Universidade Federal da Bahia, earned in 1999. He also has post-graduation certificates on Public International Law, Anti-Corruption, and Economics from the Hague Academy of International Law, the International Anti-Corruption Academy and the George Washington University. Araujo works since 2006 at the Brazilian Office of the Comptroller General. During this period, he conducted several administrative investigations and audits, in matters related to fraud, abuse, misconduct and corruption, committed by public officials and federal contractors. Besides that, he coordinated leniency agreements within national and multinational companies that committed illicit acts, in fields such as oil & gas, healthcare and infrastructure sectors, mostly related to the so-called Operation Car Wash. Finally, Araujo is regularly invited to act as a lecturer on Master of Public Administration programs to teach topics about anti-corruption and compliance. 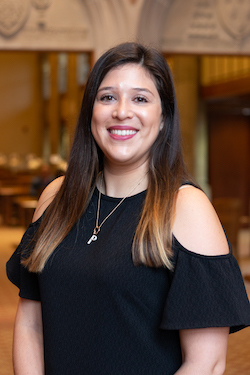 Pamela García De Presno is a graduate of the Universidad Iberoamericana, Mexico City, Mexico, receiving her Bachelor of Law Degree in 2015. In law school, she volunteered for a non-profit association whose main purpose was to combat bullying. Before pursuing her LL.M. here at University of Notre Dame, De Presno worked for international law firm Greenberg Traurig, specializing in energy and real estate related matters. Her goal this year is to become more familiar with the American legal system, particularly energy and real estate law, and moreover with American culture. Her interests range widely from reading books, practicing kick boxing, spending time with her husband and dog and watching movies. 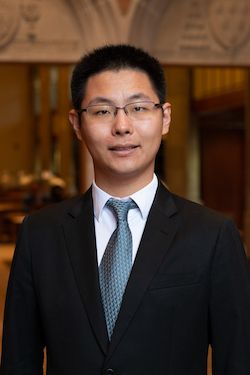 Xudong Jin earned his law degree (LLB) in 2018 from Queen Mary University of London and hold's a bachelor’s degree in international politics from Penn State University with High Honor. After graduation from law school, Jin complimented his legal studies with internships in both regional and international law firms such as Clyde & Co, Rajah & Tann and a local boutique law firm such as Shanghai Kairong, where he specialized in maritime law and aviation law. Jin also clerked at Shanghai Jing’an District People’s Court, where he assisted in criminal offense issues. His goal of pursuing the LL.M. degree is to deepen his knowledge in international law and better understand the merits of international dispute resolution, which will prepare him for practicing law in related fields. Outside professional and academic life, Jin claims to be a gastronome who loves cooking and sharing recipes. His interests also lie in classical music, history, photography, and traveling. 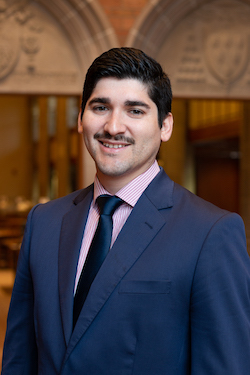 Pablo Lara earned his LL.B. from Universidad Adolfo Ibañez School of Law in 2011. Since graduation, he has done legal work in both the public and private sectors. He started as an associate in legal firms, where he focused on Corporate Law and Insurance Law; also, he got diplomas from Universidad Católica de Chile in both Corporate Governance and Insurance Law. Currently, he has been working as an attorney for the Ministry of Economy, Development, and Tourism, where he helps small and medium-sized entrepreneurs to formalize their endeavours and make a path for them to proper financing with banking institutions. Besides that, he has been working as an advisor to the entrepreneurship council of the Undersecretary of Economy in legal reforms. Lara hopes to further increase his knowledge of corporate law while at Notre Dame Law School. He would eventually like to go back to a government position or pursue a career in international business. He is a 2019-2020 Riley Scholar at Notre Dame. 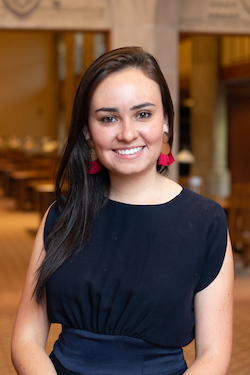 María Camila Ospina is a lawyer from the Universidad del Rosario, in Bogotá, Colombia, with two concentrations, one in international law and the other in human rights. She is a member of the Board of Directors and Council of Founders of the “New Democracy” Civic Platform and the Organization “Human Solidarity International.” During her years as a student, she participated in the Inter-American moot court competition; she also served as a research assistant to various academic projects, particularly in robotics and IHL; business and human rights, corporate criminal law; and she wrote an article for the Ibero-American Yearbook of International Criminal Law. She did internships at the Office of the United Nations High Commissioner for Human Rights in Bogotá. She also worked on a report on violence and discrimination against women for the Ombudsman's Office in Colombia; as well as a consultancy for the Ombudsman's Office in Argentina on Economic, Social and Cultural Rights; and was part of the Terre des Hommes Foundation team in Bogotá during the last year. 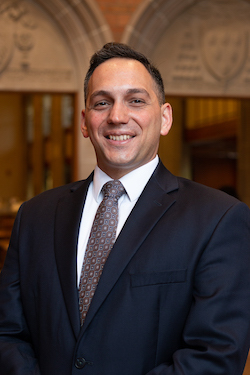 Xavier Romero is an Indiana native and attended Indiana State University for his Bachelors in marketing. Upon graduation, Romero went to work in healthcare consulting where he worked with hospitals in the United States and Canada to implement organizational best practices correlated to patient care results. After a brief time with the Marine Corps, Romero then went on to work in aviation electronics engineering for military and police aviation platforms prior to attending law school. Romero received his J.D. with a certificate in Civil Litigation from Florida Coastal School of Law. There, he served as the president of the Moot Court Honor Board and won two national competitions, one of which was the 2018 National Appellate Advocacy Tournament for Religious Freedom here at Notre Dame Law School. In his final semester, he clerked at the Middle District of Florida for the Hon. Monte C. Richardson where he assisted in patent issues before the court. While at Notre Dame Law School, he will concentrate on intellectual property law and commercial litigation. 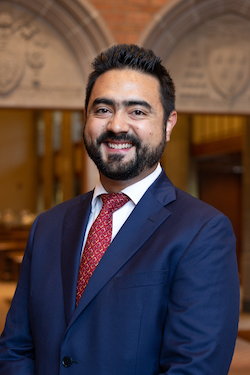 Mariano Sotomayor Bustamante received his law degree in 2016, from the Universidad Iberoamericana, located in Mexico City. During his studies he worked as a law clerk in different local boutique law firms. After graduating, Sotomayor worked for the international law firm, Greenberg Traurig, working on corporate deals, mergers and acquisitions and finance. His goal this year is to become more acquainted with the American legal system in order to be able to represent on a more complete manner, international clients back home. His interests outside of school vary from sports to spending time with his family. 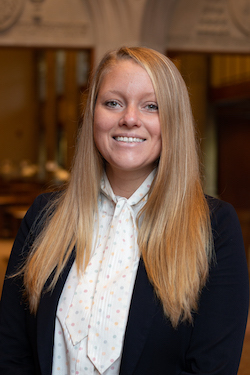 Colleen Taggart holds a Graduate Diploma in Law from the University of Law in England and a Bachelor’s Degree in Government from Cornell University. She has attained academic certificates from The Hague Academy of International Law and Université Paris II Panthéon-Assas, Sorbonne-Assas International Law School. Taggart worked for the U.S. Department of Defense on the repeal of the policy known as ‘Don’t Ask, Don’t Tell.’  Her additional federal government experience includes working for the House Armed Services Committee, and the Congressional Office of Representative Barney Frank when he served as Ranking Member for the House Financial Services Committee. Furthermore, Taggart comes to Notre Dame with practical legal experience from positions held at both corporate and boutique firms in Philadelphia. Taggart has been a board director for the Cornell Club of Philadelphia, and is a member of the Junior League. Her legal interests lie in business and international law. She enjoys cheese plates, refurbishing furniture and spending time with her King Charles Cavalier, Gary. 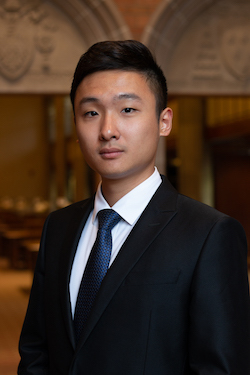 Yijie Tang graduated with Bachelor of Law degree from the Southwest University of Political Science and Law in 2019. He complimented his legal studies with a 3 months' internship in Sichuan Mianyang Intermediate People's Court. His main job of this internship is to help the presiding judge with legal mediation, including architecture & engineering contract disputes, insurance contract disputes, and commercial disputes. In his last year of law school, he passed the Chinese bar exam with high marks. Tang is interested in using intellectual property law, especially copyright law, to benefit the holders of the intellectual property rights, and to make his own contribution to China's process of improving intellectual property protection. Outside his professional practice and academic work, Tang is an amateur photographer, and a clarinet player who has a tenth level certificate in clarinet playing. His interests lie in playing football, country music, and travelling.  ​​​​​​​ 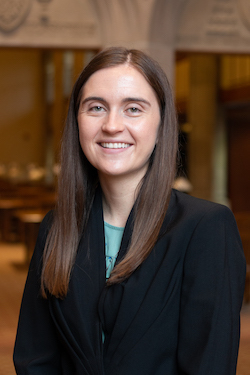 Kelley Thompson is from Florida. In 2016, she received her bachelor's degree from New College of Florida, in Sarasota. Her area of concentration was political science. While at New College, she was a teaching assistant for Introduction to World Politics, and she wrote her thesis on veterans courts in Florida. In 2019, she received her law degree from Stetson University College of Law, in Gulfport, Florida. While at Stetson, she was a member of the Honors Program, a student in the Veterans Advocacy Clinic, a member of the Moot Court Board, and a member of the Stetson Law Review. During her time on Law Review, she served as a member of the Publication Committee, co-chair of the Symposium Committee, and an articles and symposia editor. Outside of law school, she enjoys attending concerts and spending time with her family and her dogs. ​​​​​​​She is a 2019-2020 Riley Scholar at Notre Dame. After she receives her LL.M., Thompson plans to return to Florida to start her legal career. 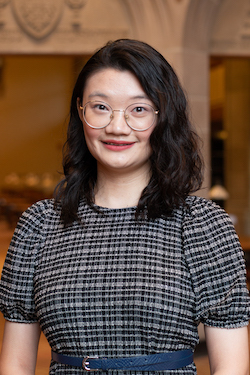 Wei Zhang received her Bachelor of Law degree from the University of Chinese Academy of Social Sciences (UCASS) in 2019, where she was awarded with merit student. As a law student, she complimented her legal studies served as a legal intern at two law firms respectively in Beijing and Zhejiang Province, focusing on civil and commercial lawsuits. She also gained practical experience while acting as a financial planning and analysis intern in Hong Kong Financial Company of AXA Group. During the junior year as a law student, she was selected as a member of UCASS team participating in the 11th "BFSU-Wanhuida Cup" Intellectual Property Moot Court Competition made up of 21 domestic and aboard school teams and achieved third place in the finals. She received scholarships to attend summer session held in Hertford College, University of Oxford. Apart from academic work, she was active in volunteer activities and dedicates herself to serving the needy, serving as teaching assistant in Peduli Anak Foundation Indonesia and Third Eye Foundation Nepal during her sophomore summer and winter. While at Notre Dame Law School, she intends to focus on corporate law and intellectual property law.​​​​​​​